Fixes the Let's Encrypt / Electron certificate bug. Since it's an upgrade to the Electron framework unfortunately it cannot be a patch release or be backported to other Joplin desktop versions. 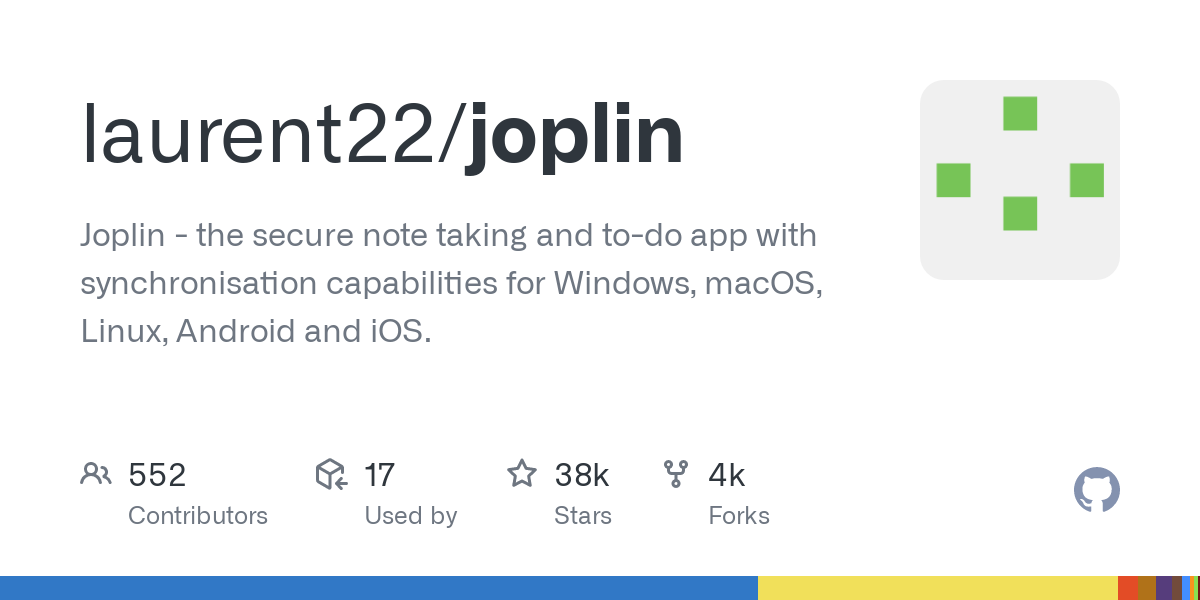 This is a tip for those using high contrast themes in Windows. The new version of Electron enforces high contrast colouring, which results in a basically two-colour theme, with all Joplin colours lost.

If you want to keep the standard Joplin themes, you need to add

to both userchrome.css and userstyle.css.

Thanks! Works like a charm and fixed my WebDAV/Let's Encrypt sync issues.

The Let's Encrypt root certificate expiration it’s a good news for Joplin, because security issues have not been fixed in Electron v10 since this summer. Thanks for this update

Quick report: After installing 2.5.1 via ./Joplin_install_and_update.sh --prerelease and restarting Joplin, my layout was lost (the panels for the outline-plugin and the note tabs plugin are now vertical at the right side, i.e. their initial unconfigured positions). I think I upgraded from 2.3.9 (not sure).

The problem might also have another reason - just wanted to mention it here.

Out of curiosity, is the app usable in high contrast mode, or are there parts of it that are illegible?

Thanks everyone for trying the pre-release and providing feedback!

I use a different theme myself, but this is how it looks using the default high contrast white and black themes.

Not unusable, but all text is forced to follow the Windows high contrast settings, all background colours and graphics are lost, and any colour-related custom CSS is very limited too. Changing themes inside the application also has no effect.

The most annoying is probably a fact that there is no indication which notebook and note are currently selected (due to no background colouring), and that hovering the mouse over different elements (e.g. buttons) doesn't produce any visible output either.

Basically, as far as I know and remember, you need to use borders instead of background colours if you want to give the user a visual indicator on what is currently hovered, selected, or focused when high contrast is active.

I am late to the party but it worked for me on WIN10. will test on my Manjaro system later today

Thanks for the update, laurent.
Is there a plan to update the portable version?
TIA
Tony

When I finally switch to Linux, I'll be able to get back in the race.

If you go to the release page, the portable app is there too: Releases · laurent22/joplin · GitHub

Sorry to hear that. Little by little we lose support for Apple platforms (same for iOS) as we upgrade frameworks. The only option indeed is to either regularly upgrade your OS or switch to Windows or Linux.

Hi,
This would also mean changing my 2010 Macbook. No, I don't intend to follow the mad rush that Apple has been inviting us to over the past few years.

Linux is the future I plan on…

Linux is the future I plan on…

It's a choice you won't regret. Fedora will be a nice way (but there are others)

I'm new to Joplin. Sync between my MacBook Pro and iPhone was going great till this "certificate expired" thing and now sync doesnt work. I see I can dowload and use the pre-released v2.5 which fixes the sync issue but how do I install this? Can I get a, "how to instal on a macbook pro - for dummies" becuase when I click around to find a dowload link, all i see is a bunch of weird named folders and now instructions anywhere... I use Nextcloud with Joplin for syncing. When I check the,
"Ignore TLS certificate errors" ... the synce between divices still doesnt work. Also I dont want Joplin cloud. I want my free Nextcloud service. HOW DO I INSTALL PRE-RELEASE?????

I want to use Joplin but if sync doesnt even work between macbook pro and iphone, why would I want it anymore?

You'll have to show some patience (and ideally some gratitude) since this is a volunteer effort. The bug was with Electron, the Joplin dependency so there was a time delay between the error being fixed and the impact it had on Joplin.

That being said, Ignore TLS certs worked for me on Win/Linux/iPad/iPhone, so it could be that your sync settings are wrong.

However, to answer your question, check Tools > Options > Application > Get Pre-releases

The main reason I stopped buying Apple computers is that they have a fixed upgrade schedule in mind where they will effectively force you to buy new hardware at certain intervals by gradually breaking everything in the older versions, making it impossible for developers to maintain an extensive catalog of software compatible with old versions.

On my nice linux desktop I am trying out this virtualization option for macOS. 2010 hardware vs. virtualization is not that different. Still testing out what can be done on the virtual option: