Ok, in the end what was the fix then?

I replaced the event based update mechanism with a periodic update mechanism. So instead of checking for whenever a note changes, the plugin just updates at fixed periods that are customizable by the user (defaulted to every 30 seconds). If the user wants an instantaneous refresh of data, they can perform a manual update from the menu option

By tearing out the event polling code completely and utilizing a longer update period, the API endpoint should not be polled as often.

Thanks for clarifying, but won't we get the same issue if it's every 30 seconds? It will still make many requests during that time. Also for people with many thousands of notes, the process might take longer than 30 seconds, so it will still be 100% cpu all the time for them.

Also another issue with creating many tags is that it's a lot of data to sync - if the user has 100,000 notes, that's 100,000 new "untagged" items to sync. You mention that the Agenda can serve as a replacement, and perhaps that's what we should look at? What's missing from the Agenda plugin to get the functionality of Untagged?

Agenda is built for a specific usecase. Only for to-dos and only to sort them in chronological order. The real solution would be allowing plugins to manipulate the search entry via API, so that plugins like Favorites could simply create options to search for untagged notes. Otherwise, there could be a built in button to find untagged notes. And as I mentioned before, the user can set how often the untagged plugin checks for updates. If they have 100,000 notes then perhaps they should set a higher poll time.

Hey guys, I have some unfortunate news: I'm no longer able to maintain my joplin related plugins as I've moved away from Joplin to using other apps.

Apart from joplin's performance issues (slow load and response times, slow sync times, constant freezes, huge amounts of RAM use, huge amounts of storage use) and almost unusable mobile app, joplin is simply not designed for anything more than storing notes and the most basic of todo lists. It was never really designed to be a to-do system. No matter how many features i try to put into the plugins, they wont change the fundamental core of how joplin works.

In addition, between work and university, i've been struggling to find the time to maintain code for all my projects, including these joplin plugins.

So, unfortunately, I'm giving up my code. If anyone is willing to maintain it, you can go ahead and fork it and continue working on it. But as of now, the versions that are published currently will be the last. Sorry guys

To make it easier for future developers ive moved the Untagged repository back to Github since thats what most developers and Joplin uses. The link is here 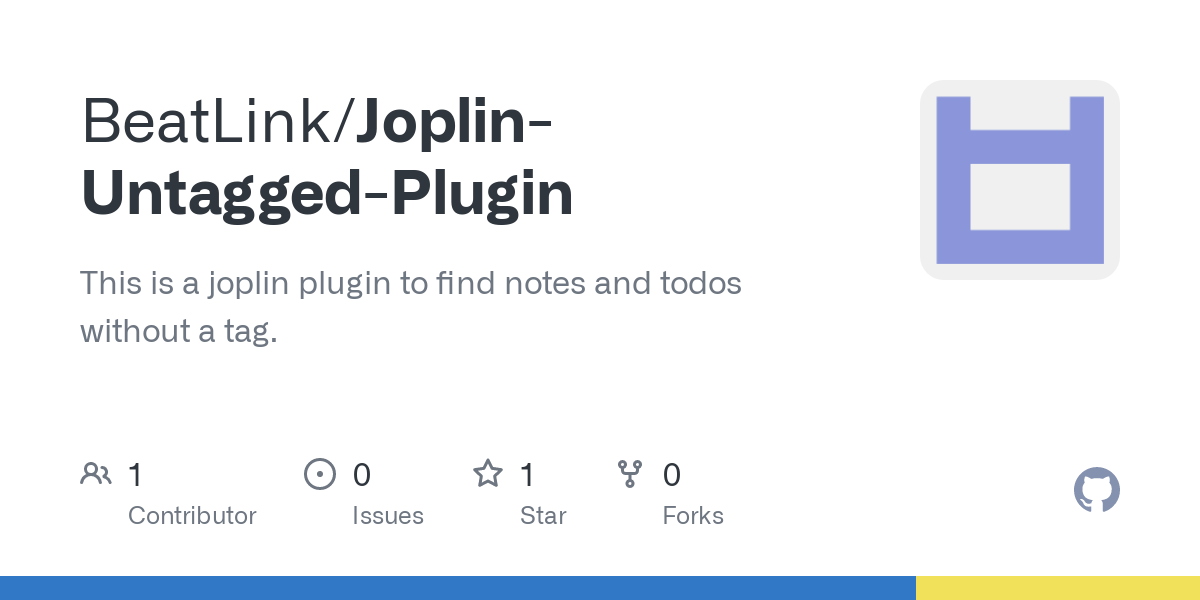 Contribute to BeatLink/Joplin-Untagged-Plugin development by creating an account on GitHub.

I was looking to use this again, and a bit of searching led meto an alternative, from here which might be of use to others

I am not familiar with that plugin, but simply searching -tag: * gives all notes without tags, if that helps.

Thank you. If you don't need to add a custom tag, you can also search directly: -tag:*