Other great note takers and points for improvement for Joplin

Could you clarify what you mean by that? Because you can actually use indentation, and in fact I use that a lot to organise my notes (usually with indented lists) but maybe you have something else in mind.

Indent using the tab key normally does unformatted text. If you do indent (you need to do double indents and have line spaces to make it work), the indent block is highlighted green in the regular markdown editor. However, it is treated as inline code in the visual editor. The biggest issue with all this is the inconsistency and indents's use of large spaces since it needs that double transform.

It would be very hard to have more than couple indent hierarchy in a page because one will run out of available space quickly. And wrapped indent blocks do not look nice geenrally, something Trilium sucks at ,it always wraps the blocks.

If you go back and forth between the regular editor and the visual editor (just make a very small change to test), you will see that the double indent block is converted to a code block.

Here is a screenshot that shows the editor, rendered and how the same text looks in a notepad editor. I personally prefer the spacing in a regular notepad editor, better readable and space efficient.

Speaking of other projects deserving attention, our brothers and sisters from China made an impressive app called Siyuan.

What's good about it?

P.S. I'm not sure if this post fits in this thread, if it doesn't, I leave to moderators to split it

Update: Siyuan is actually a proprietary software whereas vditor is open source, thanks to @hyfree for pointing it out. Sorry for misinformation!

While on we are on additional notetakers, here is another one that can be self-hosted. There are both web app, desktop clients and mobile apps.

Thanks for sharing! That editor is so cool, for anyone interested they have a demo available online. 如何在 React 中使用 - Vditor

It should be possible to integrate this editor in to Joplin as well. From my testing it works really well.

It should be possible to integrate this editor in to Joplin as well. From my testing it works really well.

That would be very interesting indeed. The user experience is excellent. The appearance of the menus, the full screen mode... very good. In addition, it is excellent that the backlinks give the context of the sentence in which the reference is found.

Yeah, that's one of the few things I think Joplin could improve upon.... even with the awesome Rich Markdown plugin. Agree with you both... wish Joplin had a similar experience, editor wise

Love how you can create tables, code etc with just one button push. Am I correct that there is no support for images though? I see some menu options so I might have missed it, I don't speak Chinese I'm afraid.

Try pasting the following markdown in to the editor.

It looks like the little cloud icon is the attach feature, but it's disabled for the demo.

Yeah, I think I've already mentioned it here on the forum: one thing I'd really like in Joplin would be to have a scrolling view of the contents of notes when selecting a folder. Something like the one above: so that if I have dozens of short notes in a folder, I'd be able to see all of them at a glance.

There are a few things I missed from Evernote when I started using Joplin. Two concerned being able to compare the information from multiple notes. The first was the lack of detachables notes, but that could be worked around by using external editors. The second concerned the lack of Evernote's view options for the note list, specifically the snippet view which might be similar to what you're looking for:

That's the sort of enhancement provided by plugins in Joplinland. @mablin7's Kanban Board Project springs immediately to mind as an example.

I do not think that Markdown is the ultimate solution for note-taking. It works for some people, and it does not work for some others. To me the lack of proper tabbing or indent is a weakness in a note editor, and that is a matter of personal taste, not saying everyone should adhere to this method of note taking.

I agree it's a matter of individual preference, and Markdown wasn't really created with indented outlines in mind. @laurent's use of tab indenting makes perfect sense if you're editing notes as text, but that information gets lost in the rendering. For my purposes adding [TOC] and different levels of headings is sufficient as it allows me to navigate when I'm using a rendered note for reference.

I can speak a little Chinese, and language translation is not very difficult. For example, I am using Google Translate to communicate with you.

I also tried it without any problem. For me, the interface was not too complicated. What I had problems with was that Markdown support was severely limited, there was no syntax highlighting in code blocks, there was no typescript between code type elements, server-side javascript could be run, but console.log did nothing.

What was nice about it was the code block execution option, I would like to see something like that in Joplin. Especially if it would be complemented with python, there are js libraries that allow this, e.g. brpython.

What it really wasn't was the markdown handling, and that there was no mobile version.

Are y'all talking about this editor?

That editor is so cool, for anyone interested they have a demo available online. 如何在 React 中使用 - Vditor

Because I've opened it just now and only tried 2 things; one didn't work, and the other outright garbled my text. I'm not very impressed.

That's been my experience too when looking a bit more closely at these editors. I've reviewed quite a few when I've implemented the Rich Text editor and they are all a bit like this. They have nice, impressive demos, but you often find all kind of limitations that makes them hard to use in a real app.

And I didn't check the API or doc, but usually they are not good enough to support what we need (in particular with regards to attachments, note links, code blocks, katex, etc.).

I also passed Trilium on my long walk to Joplin.
I was put off by the nerdy UI and also the lack of mobile apps.

But..as mentioned here before, a card view mode would really be a great addition to Joplin.
This allows for a very quick overview and visual prorization and curodization of notes.
This efficient overview would otherwise, be one of the few things I will miss when I will have completely switched from Google Notes (Keep) to Joplin.

Thanks for considering this feature!

A book will display an overview of all the notes t

one thing I'd really like in Joplin would be to have a scrolling view of the contents of notes when selecting a folder.

I have been giving some thought about card view and I think @JackGruber 's work on the plugin note overview might be the solution to achieving this. I have already been able to achieve this thanks to some new updates on the note over view plugin:

My plan is that instead of using <details> tag I might able to use a custom html tag with some custom css to display note overview as cards. I just need a few hours to try things out.

I am quite happy with the editor in the desktop versions. However, the mobile editors would be easier to use with some more functions. On the one hand I think of some kind of a toolbar above the keyboard. Like it is visible in the screenshots of the MDNotes App (IOS). For android I think a good app for comparison is Markor. MDNotes is to my knowledge not open source and Markor is written in Java. Both of them interact directly with the filesystem.

A toolbar with quick camera/photos access could come in very handy as iOS15 supports OCR (Live Text, only supported in newer devices) in the camera/photos app. As Markor seems to have a toolbar too, I assume there is a way to implement something in all mobile versions.
Maybe there is also already a custom made keyboard around that makes it easier to type markdown on mobile? Though, in terms of style it would most likely look better if it is from Joplin itself.

On the other hand I am missing a faster navigation on tablets in landscape orientation (notebooks -> note -> open/edit). A fixed notes sidebar would improve usability on tablets in landscape orientation. For the portrait mode and on too small devices I don't think a change of behavior would be helpful. Maybe there were already considerations or there are reasons why this was not implemented.

To continue the discussion somewhat in regards to markdown editors, I recently came across Cherry Editor the other day which piqued my interest. 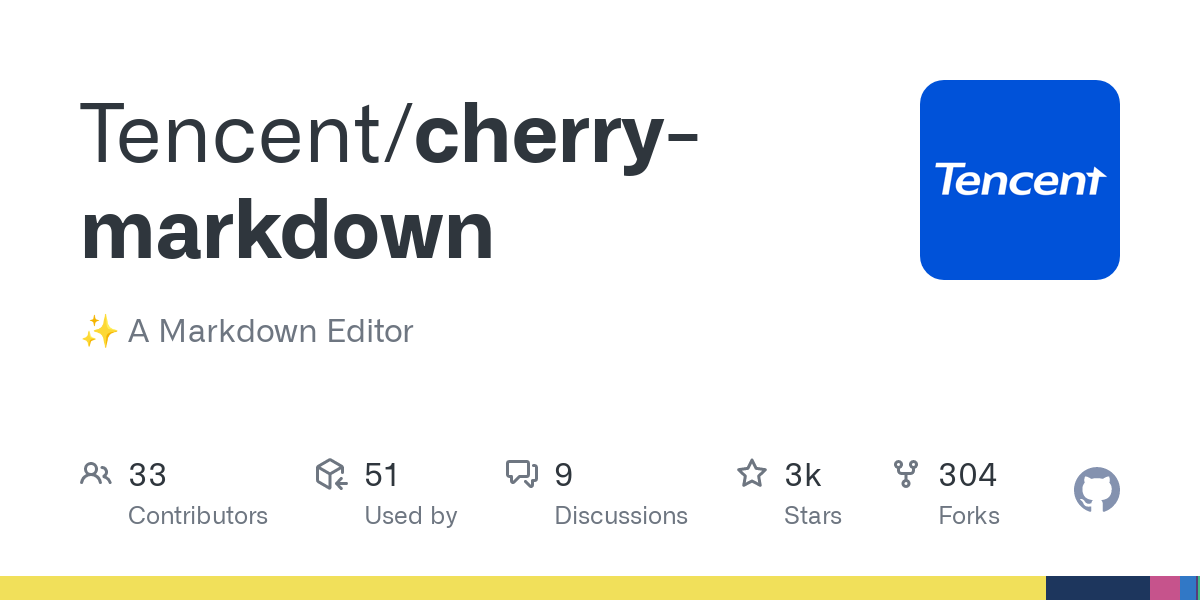 ✨ A Markdown Editor. Contribute to Tencent/cherry-markdown development by creating an account on GitHub.

The editor looks nice and seems to behave quite nicely. It does appear to be very new so I've had a couple of janky experiences but nothing major.

The obvious problem I see here is the extended "CherryMarkdown" syntax not being compatible with other markdown flavours. I suppose there could always be a conversion routine when exporting to markdown that could strip the extended syntax away to make it compatible again.

The dynamic image resizing is something that I personally would find really helpful in Joplin when trying to import photos etc that don't take over my whole screen, I obviously use the proper html tag syntax for resizing but its clumsy and certainly not intuitive for less technical users.

I'm going to keep my eye on it, it looks like it has potential to me.