Rationale for no webapp

I saw no posts (pinned or not) with the rationale for not doing a webapp for Joplin.
I'm not talking about publishing, but editing.
Did I miss the post ?

Its a bit odd to pin a feature that doesn't exist, there are lots of things Joplin doesn't have but it won't be actively advertised but there are tons of threads on the subject: 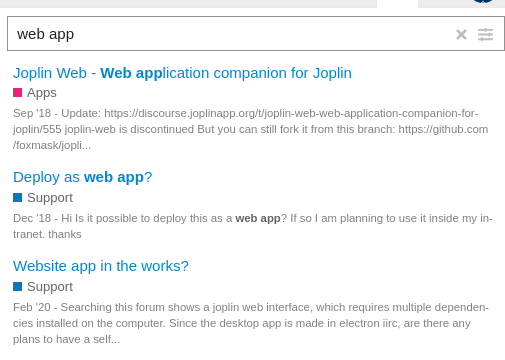 Maybe I din"t choose the category wisely, but in the post about Joplin Server, Laurent said it is not a web client and will never be. I read this as "there will not be an official webapp for Joplin".
As you said, there are plenty of threads on the subject, but if I read right, I would be glad to have the rationale. This is kind of product roadmap also, telling officially people the d'ont need to ask Joplin team for a webapp, although devs can provide plugins/alternative solutions as they wish.
And if I'm wrong; it is worth telling it to the communitry also (and stand me corrected

Honestly I don't think there is much to it other than its a lot of work to implement and there currently aren't any plans to do so.

Coming from Evernote, I miss a web client, too - but IMHO the rationale is straightforward (unless I'm missing something technical): Joplin stores its notes primarily on the local device, not in the cloud - making it a good choice for all those who don't like to trust Evernote's or MS OneNote's servers with their data. I couldn't figure out a way to have the best of both worlds (zero knowledge on the provider's side and comfortable browser access at the same time). If there is, I'd be the first to ask for a web app which would make things so much easier.

couldn't figure out a way to have the best of both worlds (zero knowledge on the provider's side and comfortable browser access at the same time).

I've been experimenting with building a web client for Joplin but what I have so far is barely usable even by me (and I have very low standards when it comes to note-taking apps!)
Maybe I'll finish it one day since it's a hobby project there's no ETA.

Deploying joplin on top of a nextcloud backend (with direct access) could be a way. Since Desktop app is developed on Electron, it's not that far to a webapp. For example, Turtl has a webapp, that they enrich a bit to deploy through electron.
I agree that some interactions may be more complex to manage through browser, but being able to take not on any large enough electronic device is one of my utopies.
Notion is a webapp and has apps for smartphones, e.g.

@laurent : do you confirm ?
Thanks for your input

Option No. 1 is the obvious choice, but No. 2 sounds really interesting (and reminds me of services like Standard Notes and Tresorit). But for my use case full text search is indispensible for storing notes or documents in 'the cloud', and I wonder how this can be achieved in a web app.

Being able to view and edit your notes in any browser would be a really great thing, though, even without server side search (which would require something a wee bit utopian like homomorphic encryption, as far as I'm informed).

But for my use case full text search is indispensible for storing notes or documents in 'the cloud', and I wonder how this can be achieved in a web app.

Right, I didn't think of search. Guess it rules out option 2

Haven't tried it in-depth on my Nextcloud - but I think it's fair to say that a "Markdown editor" is a feature of Nextcloud. There is no way to process multiple Markdown files (i.e. notes) in a way that Joplin does.

I don't know how it works in the background, but the Diaro app which can be also used on https://diaroapp.com/ with a Diaro PRO account syncs (and backs up) through DropBox, I think.