I am importing my Evernote into Joplin, all 17,489 notes (with attachments!), and it's been sitting for quite a while with very little feedback on screen. It would be nice if there was some sort of progress bar, or at least a disclosure triangle to show the log output of the import process. 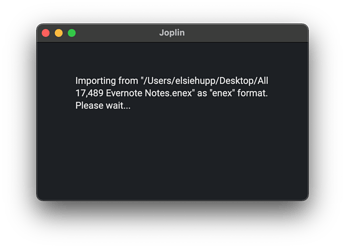 I will second this. I'm importing substantially fewer notes, and Joplin has been rotating the spinner for 10 hours with no indication as to its progress. A simple "notes imported" counter would seem to be a ridiculously easy thing to add, but would be extremely useful from a user perspective. At this point, I have no idea whether it's imported 100 notes or 1000 notes, or if it's indeed doing anything at all...

How was the synchronization, after the initial import?

@elsiehupp , how long did it take to import your 17,000 notes? I'm currently at 24 hours on importing 4,500 notes from a 2GB .enex file. I'm wondering if it would be more productive to import in smaller chunks. It only took Evernote a few minutes to export the notes.

I finally force-killed Joplin to abort the .enex import. Joplin had imported 1,336 notes in approximately 25 hours, so it looks like it would take at least three days to import a full 4,500 notes. Just a note for anyone who's been looking at the spinner for a long time on a decent-size Evernote import...

Any idea if there was any background synchronization going on? Or is this just importing into the local store?

I have only imported a few hundred notes at a time, many with attachments, and it has never taken more than a few seconds. On the other hand, it could struggle to seek in larger files or similar.

I’ve got a working Terminal install now, I’m going to try importing all my ENEX files to see how it goes.

ENEX import will be improved in the next version (1.3.x) including fixes for bugs that could cause the app to freeze on large ENEX files.

That’s great news @laurent, thanks. Any rough ETA (days/weeks/months?) — I’m in no hurry and could easily wait, my Evernote subscription is paid until May 2021.

Should I look into testing against a pre-release? If I go this route, any compatibility issues with the release version of the iOS client?

@TheDave I wasn't able to respond before because of a reply-per-thread limitation on my account. At any rate, I started breaking down my EN exports into smaller chunks and have identified a small group of notes that are causing the Joplin import to hang.

Hang issue on importing certain .enex files is resolved in 1.3.10.

I ended up deleting the imported notes because they weren't organized into the proper notebooks. Apparently the two ways to preserve notebooks is to import them one at a time or to replicate the notebook structure as tags. I have dozens and dozens of notebooks, so either of these is a big task, and I kind of ended up deferring it indefinitely. I'm still using Joplin for a certain subset of notes (the ones that are specific to my Linux desktop), but I have yet to succeed in escaping Evernote's clutches...

Was there any update on this. Late to the party but I left my computer on for six day importing the ENEX file, but to no avail. I just stopped the import in the end.