Some UI things allow for, what I call, a tickbox (checkbox seems to be the more popular term) which can be blank, ticked or "part ticked". It cycles between a blank box, a marked box and a semi marked one. The image below doesn't really show what I was after very well, but demonstrates a 3rd option, other than true/false with the "monkey". It's more a part-done rather than 'disabled' which it actually shows.

The other thing I initially didn't make it clear that it's in the list of notes that I am hoping for.

(edit: I've clarified what I was after)

The main issue is that it isn't part of the markdown spec on which Joplin is based, in particular the GFM extensions - GitHub Flavored Markdown Spec

So to implement this would mean breaking from "portable" markdown into something custom.

Sorry, I didn't explain very well. I mean in the notes list, where there is a box on the left of the title of the todo items.

Right, I get you. Where would you need to use this out of interest? Normally you see this kind of tickbox on software installers where it is something included within a parent selector so you tick it for something to happen rather than after something has been done.

Yes, I suppose that is the sort of thing you see them used for.

When I make a todo item, if it needs a bit more explanation than just "buy birthday card" I tend to write a a bigger explanation in the note itself. So the title might be "replace batteries in kids toys" and I'll put a list in the note, maybe with markdown tickboxes, reminding me to

Example of usage of progress bar elements for to-do lists. Items are check boxes with a progress bar in parentheses at the end of the line)1210×197 19.7 KB

(Of course, this is much less convenient than a checkbox).

Although I like this and will defo find a use for it, I'm hoping for something in the notes list, not in a note itself.

The "disabled" (greyed out) checkbox as it's represented with HTML signifies "disabled" in my mind, so I'm not sure that's ideal. Maybe what you want is the "tri-state" or "indeterminate" checkbox? 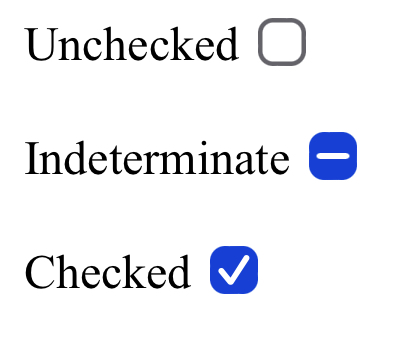 If what you're wanting to signify is "partially done," I think that's a totally pragmatic thing to want to represent in checklists. I'm not sure the "indeterminate" state is well-suited for that semantically, though. The other difficulty is, I think that state can only be set by JavaScript; last I checked there was no indeterminate attribute to represent that in the same ways as checked, although browser standards evolve, so that may not be true anymore.

Even if you used the indeterminate state for that under the hood somehow, you'd still probably want a plugin to replace the "partially done" checkboxes with a less visually ambiguous representation, such as the example below, a screenshot from an internal wiki where we use SVG images for the various checkbox states.

…or at least style them differently with CSS.

No promises on this whatsoever, but I'm interested enough in your proposition to go have a look at how to make a Joplin plugin (some rainy day), because I would find this feature useful as well. As mentioned, it would depart from the established Markdown spec for checklists, though, so there are lots of other instances I can think of where the "partial" checkbox might not render correctly, such as export and printing.

Yes, the example I showed probably wasn't the best, it does seem to indicate disabled which isn't what I'm after.

I think my original question didn't sum up what I was after. The part done in the note may well be useful and I'd probably use such a thing, but what I was hoping for was the part-ticked in the list of notes.

What's a real-life example of a situation where you'd use a "part-ticked" tickbox?

I really think we're talking about the same thing, but an example of your personal use case should clear it up for me.

I have a to-do notebook. There might be 10 things to do, but some of them are multi-part tasks. Rather than separate the parts into different to-do's I have one main note and put a more detailed list or just more details in the note. So the titles of my notes might be

Any one of those might have several things to do, so the 2nd one might have the following in the note itself:

And I'll tick bits off as I do them. And I'd like it if the title could be marked as "part-done".