With that issue, I explained I would like to create note, without having to open the app.
After thinking of this and with the last comment, I’d loved to see a possibility to do something like this

that way, with the scheduler of our OS, we could add notes from various sources.

Seconded. I’d also thought about how to push notes into Joplin, and the command line seems like the best option.

You can already do this with the command line tool:

As a general rule, there’s a lot of scripting you can do with the CLI - import, export, create, edit and delete notes, or directly set properties of notes via the set command.

If I remember well our exchanges, the command line tool joplin is a command for the terminal version with shell mode, not the desktop one ?

Because when I run

that opens the desktop app and no help

As you said earlier many times, the terminal version does not allow to access to the same notes of the desktop one.
So If I want to trick,

Yes the CLI app is separate and cannot directly act on the profile of the desktop app. You would need to set the desktop and CLI app to sync to the same target, then whenever you make a change via the CLI app they will appear in the desktop app too. Just make sure you run joplin sync once you’ve made your changes.

In theory you can make both the CLI and desktop app use the same profile via the --profile flag, but in practice it would cause issues if both apps are modifying the same profile at the same time so it’s not recommanded.

I noticed your warning, but I do not plan to use the both at the same times.
That way, that solution avoids to waste disk space. And @ work, as I do not sync anywhere, that should not be a big deal.

@ home I will be able to schedule job to create note ; without opening joplin desktop and the opposite too

If the two apps aren’t open at the same time it would indeed work, and there’s no risk of conflicts.

On a future version, there will be an option to run a local Joplin server that can accept a note and add it directly to a notebook. This is basically to support the web clipper but it can also be used to easily add a note in scripts. I’ve got a working prototype already, just need to clean it up a bit.

On a future version, there will be an option to run a local Joplin server that can accept a note and add it directly to a notebook. This is basically to support the web clipper but it can also be used to easily add a note in scripts. I’ve got a working prototype already, just need to clean it up a bit.

That's awesome; it did occur to me, but I didn't dare even hope. And you've done it already.

Made a test of using joplin (terminal/desktop) with my personal notes, it's fun and great .

I will test to create notes from rss feeds

I will test to create notes from rss feeds

Do you use a script for that? (Reading RSS, transforming into note, importing.) If yes, it would be awesome, if you could share that.

That’s awesome; it did occur to me, but I didn’t dare even hope. And you’ve done it already. 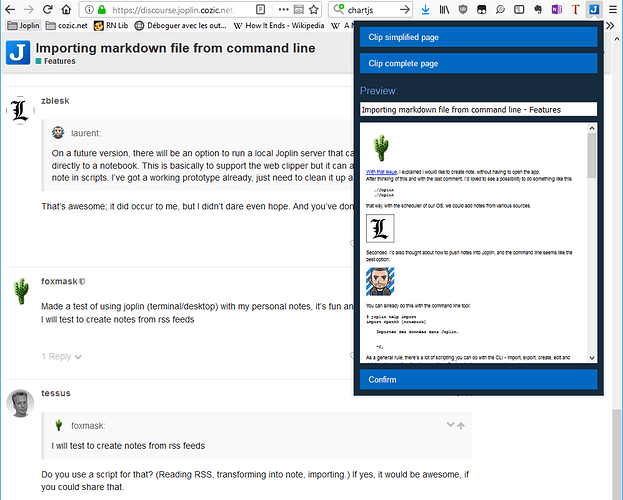 It's working pretty well already but as always it's in the details and edge cases that there's still more to do.

that iz ah ho some

I make a django app to be able to add feeds to the database then with a crontab launch a command that will read the url, download rss ; put article in joplin.

As a general rule, there’s a lot of scripting you can do with the CLI - import, export, create, edit and delete notes, or directly set properties of notes via the set command.

How do I import a note along with other resources?
E.g. I want to import a note that references some image and I’d like for the image to also be imported. I’ve tried the naive approach (with the image saved right next to the note), but that didn’t work.

Currently importing resources only work with Enex files. For other format, it would have to be done manually, for example using the “attach” command.

Consider it a feature request, then.

made this https://github.com/foxmask/jong - I need to test the import at least.
otherwise this gives:

then create the md file by

with "jong" i wrote that process:

In that process I loose the title of each article, i have to change it, to be able to add a readable title in joplin, the one of each article just after creating the file, with

But is it the right way ? or joplin uses the first line of the article-name.md file as the title ?

I have the same question about every "set" properties in fact

I would like to set the author and the source_url too, but I'm not sure I have to use

May be the best question is: for joplin, how the content of a markdown has to be ?

@foxmask, currently the title is simply the filename without the extension, and the note content is the full content of the file.

If you need more control, you either need to use the set command as you’re already doing, or import in the “raw” format. Raw format is simply the format used for synchronisation so it can have all the supported properties (but it might be more complicated to create).

I will just do 4 joplin commands, 1 joplin import and 3 joplin set.

the result is fun