.ENEX Imported Records Have Raw Markup at the top of notes

I just did an .ENEX import and a fair number of my imported records have raw XML markup at the top of the files, often after an image. They look like below whether I use the markup or WYSIWYG. Is there a way to clean this up? 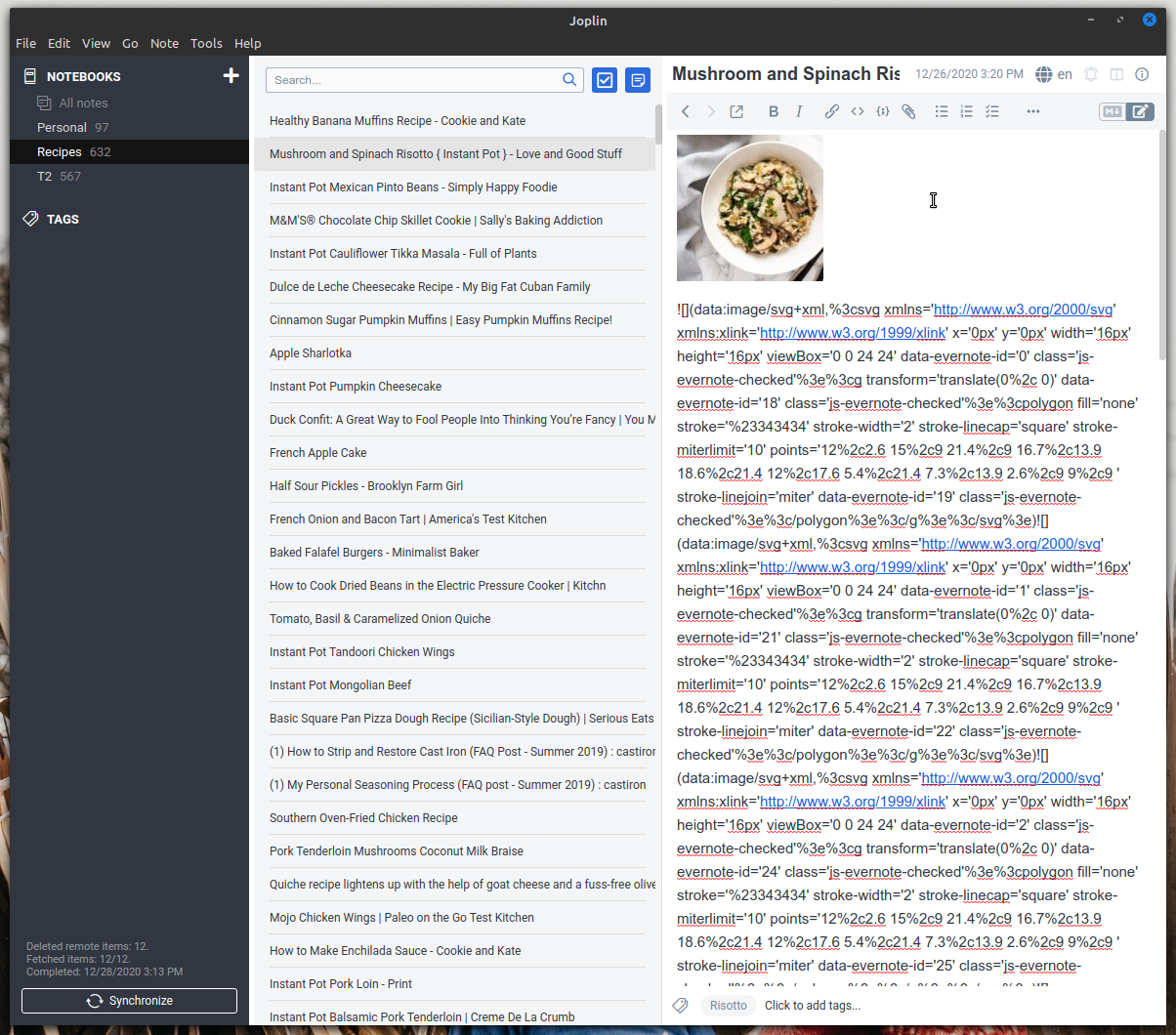 Could you provide an ENEX file that shows the problem?

Just the ENEX file for a note that has a problem is enough. So from your screenshot it would be for example the note titled "Mushroom and Spinach..." - simply right-click on it in Evernote and export as ENEX.

The latest version should fix this issue: https://github.com/laurent22/joplin/releases/tag/v1.5.13

I reimported my recipes and a random spot check shows all except for one to have imported correctly. Wow. I'm impressed that you fixed this so quickly. Do you want me to send any other notes that I find that this issue shows up in?

P.S. obviously unrelated to this note, but like others here I'm doing a deep dive to determine if I can completely switch from Evernote. The inline media (specifically PDFs) may be a dealbreaker for me. It seems that you may be pretty far along in remedying that per this: Feature request: Inline PDF Is this on the near-term horizon?

The inline media (specifically PDFs) may be a dealbreaker for me.

If you are now using 1.5.13 you already have it! I think it should be on by default however Tools > Options > Markdown is where the switches are...

Cool. I have it and it works!

I realize that this is possibly sacrilege, but being that I'm new to the world of markdown, that there will be a way to do this with WYSIWYG?

Do you want me to send any other notes that I find that this issue shows up in?

Yes, if there's any other note feel free to upload them here.

Wow. I'm impressed that you fixed this so quickly.

Quite the culture shock coming from Evernote, isn't it? Where they're too busy to deal with bugs because they're trying to figure out exactly which shade of green the elephant logo should be.

There is a skill in driving off users in droves that they have certainly mastered.

Maybe we should start a separate category to share recipes publicly.... hahaha

I think I just came up with a feature request for the server. Allow people to subscribe to a public notebook in read-only mode.

Good idea on the recipes! and BTW, that one is a keeper

The latest release should fix this: https://github.com/laurent22/joplin/releases/tag/v1.5.14 I've recently added support for hidden sections in enex files, which I thought was quite harmless, but it caused a few small issues like this one.

That fixed it. I will report back on any other bad .enex import records.

I have been doing further testing on IOS and Android and records that render properly (and assume were imported properly) in the desktop app, are showing the same header garbage in the notes. I don't mean to be a PITA, is it useful for me to send these problematic notes? and if so, do you want the individual .ENEX for them, or something else?

If it's the SVG, it's because part of the fix was in the way they are rendered and that fix has only been applied to the desktop app at the moment. So once the new iOS and Android versions are released it should work.