Simple request : be able to resize the width of markdown editor (I would like smaller editor and larger viewer).

I, too, would appreciate this, but it’s not critical.

Yes, would be very useful, especially on large monitors (2560px wide or more).

If you can make a button that can toggle a 'display:none;' to the editor DIV, then we have what we want. I do that now manually, so I have a nice big preview-window. 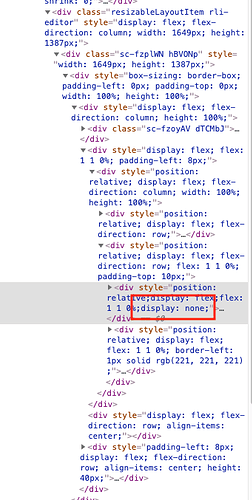 Sounds like what you want is the editor toggle. You can already do that by pressing this button in the top right corner (right of the title)

Looks perhaps like it, but no, I want a single preview window, not a single WYSIWYG-editor window.

Looks perhaps like it, but no, I want a single preview window, not a single WYSIWYG-editor window.

The latter button toggles between markdown and the WYSIWYG editor.

But if you want to see markdown and rendered views simultaneously and be able to adjust relative widths of those panels, which I think is what you're getting at, then that would be a new feature request.

For context, this button

Toggles between markdown and WYSIWYG

toggles display:none on the markdown editor (or the viewer)

Aahh, sorry, I never saw that tiny little toggle. It does indeed exactly what I need, as long as resizing the editor window isn't available. Thanks for pointing it out!

One thing to note – you can choose what that toggle does under View > Layout Button Sequence. So you can have it switch through all three or go back and forth between edit/render. Plus, Command/Ctrl+L is the same as that button, so you can quickly switch between the options.

Not a dynamic resizing but still a solution to adjust the width of the editor and its preview:

Hi all, On the latest version. Can the width of the split view columns be adjusted? [image] The MD view takes too much space. At the end of the day, I'm after the processed view. If not, how difficult do you think adding that feature would be. Have been planning to contribute to Joplin for some time now. Looking for small ways to contribute first.