You and i might get along then. I accidentally break things quite often doing similar tactics with software if given the proper knowledge and whatnot

Joplin seems to behave normally, but I get a grey Joplin icon in the system tray. It was blue in the previous release.

Well, but you are most likely finding edge cases others missed.

Joplin seems to behave normally, but I get a grey Joplin icon in the system tray. It was blue in the previous release.

You are running a dev version, which has a gray icon.

If a vertical flowchart does not have a “node” or “label” on a left-hand flow, the left of the chart disappears off the left of the screen. I suppose this could be Mermaid rather than Joplin but reported here anyway… 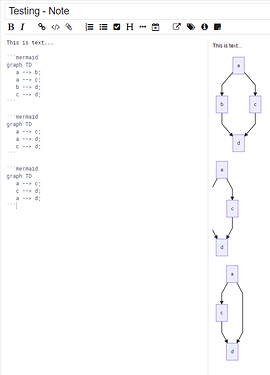 If a user has edit and viewer panes open and creates a Mermaid pie chart, the pie chart key does not fit in the viewer pane. 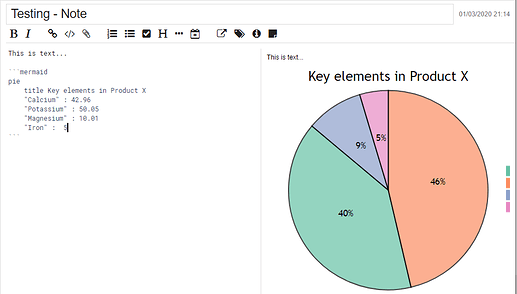 Then when switching to viewer only the pie chart remains scaled up larger than the page. 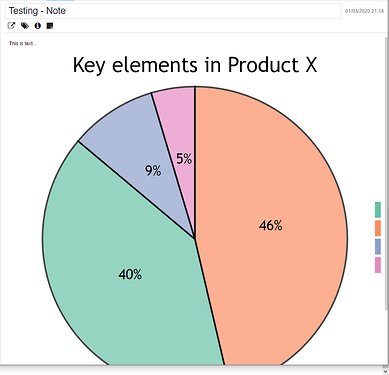 Clicking onto another note and then returning to the Pie Chart note restores normality. 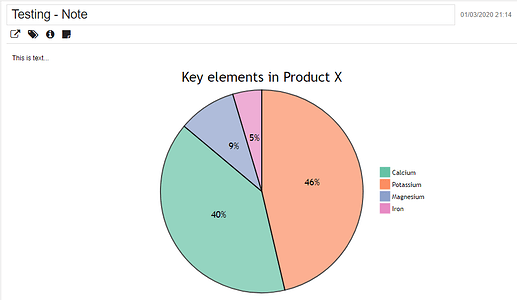 I suppose this could be Mermaid rather than Joplin but reported here anyway (again!)…

Can you please post the source in a code block? It's hard to copy and paste from an image.

Your word is my command…

Your word is my command…

“At your command.” I loved BSG in the 80’s. But I also enjoyed the reimagined series.

@dpoulton, could you add these two bugs on GitHub please?

I loved BSG in the 80’s. But I also enjoyed the reimagined series.

I never knew the British Society of Gastroenterology had a series made about them, never mind a reimagining.

I guess they solved their problems using “gut feeling”.

I really do appreciate that this is a new feature but it looks like it is intended to be included in the next full release.

A few opinions and one possible bug.

(1) (Opinion) There really should be some warning here (or a “Here Be Dragons” page) saying that if you do not know what you are doing you could cause yourself some problems by deleting resources you actually may have wanted to keep. This is especially true where the resource in question does not have a name / link against it. That could make it seem that the resource is “orphaned”. It’s not. It just doesn’t have a name stored against it. Also it may not be a bad idea to also suggest a backup to JEX first . The idea of a warning was mentioned in the PR. This leads into …

(2) (Opinion) The “Delete” button doesn’t send files to a Recycle Bin (or equivalent), it properly deletes them. Just one click and it’s gone. The delete button should at least have an “Are you sure?” type of dialog. Alternatively the resources could be selected by checkbox with a single delete button on the page. When you press it it asks, “Are you sure you want to delete xx resources from your notes? This process is final and deleted resources cannot be recovered.” I just get the feeling that some ill-informed “clickage” on this page could ruin a persons day, and that ruined day could be many days AFTER the ill-informed “clickage” when the user discovers an important attachment is now missing from their note.

(3) (Bug?) No scroll bar. You can use the mouse wheel but if you have LOTS of resources and you are looking for a specific resource a scroll bar may be quicker. There’s no horizontal scroll bar either.

(4) (Opinion) Very, very minor but any settings page within Joplin should match the look and feel of all the other settings pages within Joplin. The basic, Times New Roman, web-page look clashes with the rest of the app.

@dpoulton on 1), i think the resources dialogue should be fully locked first with the warning you’re suggesting coming after they click unlock with something along the lines of “by approving this unlock, you waive all rights to support for any misfortunes that may come from this.” That may be a bit harsh but it can be justified when they post a panicked support request here.

and perhaps hidden as well, like the about:config concept in Firefox.

All good suggestions about the resource list, which I’ve listed there: https://github.com/laurent22/joplin/issues/2639 This is indeed an advanced tool and so there should be warning at the top.

(4) (Opinion) Very, very minor but any settings page within Joplin should match the look and feel of all the other settings pages within Joplin. The basic, Times New Roman, web-page look clashes with the rest of the app.

I've noticed that it even shows a white background in the Dark theme.

The points you mentioned are all valid. First we wanted the functionality. Now, we can make it pretty.

Goto End is rendered to plain text, no link.
With version 1.0.179 no problem.
BTW great to have Mermaid back!