Image's quality is reduced in Editor

Hello!
I am using Joplin 2.9.1 (prod, win32) and just finding out that the image is not shown as clear as it actually is in Editor pane.
However, if I right click the image and open it with Windows viewer it can be shown very clear. 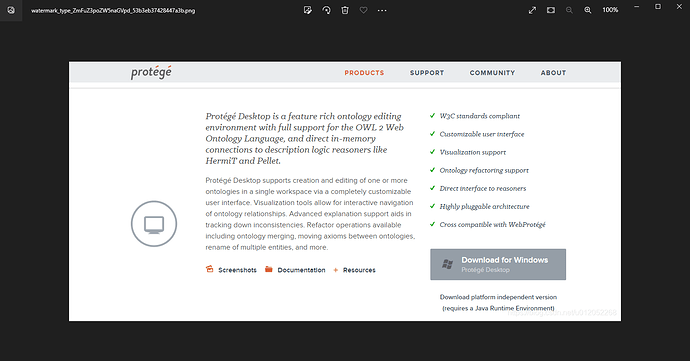 If anyone knows the image quality would be shrunk after the .md files are rendered in Editor pane?

I opened one bug on Github https://github.com/laurent22/joplin/issues/6714

Any plan to fix this?

If anyone knows the image quality would be shrunk after the .md files are rendered in Editor pane?

It appears that the image file itself not being scaled down may be the cause the issue you are experiencing. As far as I know Joplin does not physically alter any image file that is imported.

Looking at the first screenshot above, the width of the actual Protege page in the image is about 840px wide, whereas in the second one it is about 1190px wide. Displaying an 1190px wide bitmap image at 840px wide is possibly causing the loss of definition.

It depends on your monitor resolution but to test this you could display the note and make Joplin full-screen. Set the view to viewer only (without the markdown editor open). Then press F10 & F11 to close the side bar and the note list. Does the image get bigger in the note and look sharp again?

Hello! Thank you for your explanation.

However I would always directly paste the image into my note; I think, it is Joplin itself process the image with less resolution if the actual pixel of the image is larger than the note width (it might not be a resolution lost from higher quality to lower quality).

I set the maximum width of the note to 0

Which I think means, the image can also be shown clear (my monitor resolution is enough to display the high quality images).

If anywhere I did not get it correct, please just point me out...