I did’t find is so maybe its possible to implement a WordCount Feature so that I can mark my Text, right klick “word count” and get numbers for words w/o spaces, words, etc. Would be very helpfull sometimes.

Will anyone tackle this?

It is there. It is last icon of the Markdown editor toolbar.

Ahh, I found it. Just what I needed. Thanks a lot.

We don't have it on the Android version, it's a bit sad when writing on the go.

Was this lost in the move from Ace(?) to Codemirror(?) - on desktop at least. I can find reference to word counts including old PRs etc. but nothing in the application itself. Either that or I just can't find it...

You can even assign as shortcut.

Thanks, not the most intuitive but it is at least there.

Just curious, what would be more intuitive? I'm not the one who put it under the Note menu, but it seems to me that there isn't a more natural place for it.

For me I think it is that there isn't really anything in the note menu that I've have even used so far, my experience of what 'kind' of functions it should contain haven't really been set.
Take the default 3 options in there:

To me the most logical place (i.e. where I first looked for it) is actually up in the top right of the editor with the note properties/editor layout/spell checker etc.
Personally I think it would be best as a counting display such as 'W-123' that is also a button to open the rest of the statistics window/popup (similar to the same function in Mark Text). To go further it would be nice to have an option that would allow a default display between of the different stats (Words/Lines/Characters etc.).
As a crude mockup: 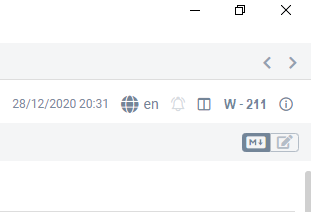 Is this possible at a notebook level? I'd like to get a word count of all notes in all notebooks.

I'd like statistics for a selection of text. The usual Mac right-click "Services" menu is unavailable, so apps like WordService cannot be used. Thanks!

It wants to be on the Note itself as W000 C000 and change if a selection is made, i.e. able to count a selection. I (and many writers) absolutely rely on these counts for certain kind of content,
Similarly on the iOS app.