Dropbox has changed its policy for free tier accounts. Only three devices may be linked to the account. This means if you use Dropbox’s free service to sync Joplin notes you can only access the notes from three devices.

Perhaps the Joplin team can expand the number of sync services to include a few more as Dropbox is not so attractive as it was. I have just discovered sync.com and it looks good. They allow unlimited devices, just like Dropbox used to.

Resilio Sync is an option too. It is the successor to Bittorrent sync, and syncs directly from one computer to another. This is how I how I use Joplin, by having Resilio sync the Joplin database folder.

Thanks for the suggestion. I’m reading about Resilio now

There are many possible solutions, but I bet 90% of users will just use whatever the default is and that is Dropbox. Dropbox was fine until they changed their policy.

Personally, I think I will self-host on my Synology NAS box.

Personally, I think I will self-host on my Synology NAS box.

I've been using my own solution since the beginning, because I'm too paranoid to trust any cloud provider. I have never used any public or private cloud storage that wasn't under my control.

I have looked at Sync.com (the link you posted) and I have noticed a few red flags. Their E2E component is not disclosed. The fact that the data resides on Canadian servers is not necessariy a good thing. I don't want to speak ill of Canada, being Canadian myself, but our current government does pretty much anything the US authorities demand. Especially when it comes to "information requests".

Therefore a self-hosted system is always the best choice, IMO that is.

Why? If Joplin software is doing the right thing, why not store your encrypted notes on a public server with read access granted to the entire world? I use a few cloud services and I’m fine with anyone seeing the encrypted bytes. Maybe you don’t trust that the notes software is in fact correct and will continue to be correct in the future?

Why? If Joplin software is doing the right thing, why not store your encrypted notes on a public server with read access granted to the entire world?

I agree, in that case you are most likely right. However, I rather rely on serveral factors than just one.

@chrisalbertson I’m also currently looking into sync(.)com and trying out their free version which lacks an option to test it on ubuntu linux. It says for the paid version that you can share a link of a folder that offers the upload option. See screenshot attached. 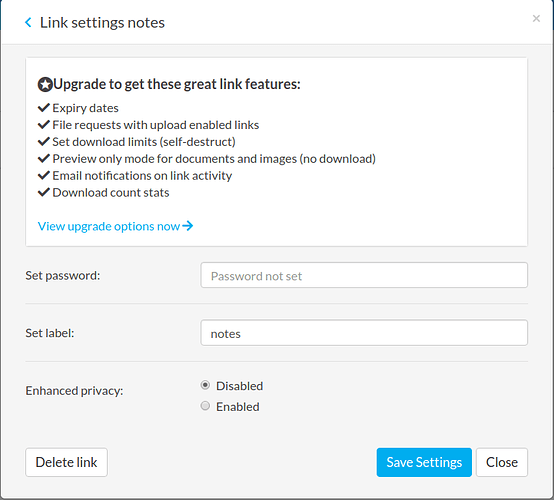 If we would be using the link to that shared folder with upload option at the setting in Joplinapp “Directory to synchronize with (absolute path)” Do you guys think that this would work? That is, when I would click on synchronize, joplinapp would upload&download all the data?

I just want to say that Joplin doesn’t count against your computer limit with Dropbox. I have tested this and I have 3 computers for Dropbox but I also have 2 others (total of 5 devices combined) that are just for Joplin using the API for Dropbox.

The computer count only applies for the Dropbox client and not API access.