As some of you may know, we need to hire a lawyer in order to write a proper license for Joplin Server (this has been discussed in this thread) so I have now created a page on GoFundMe for this purpose.

So if you're using Joplin Server and would like to help with this, please follow the link! And if you have any question feel free to ask here. 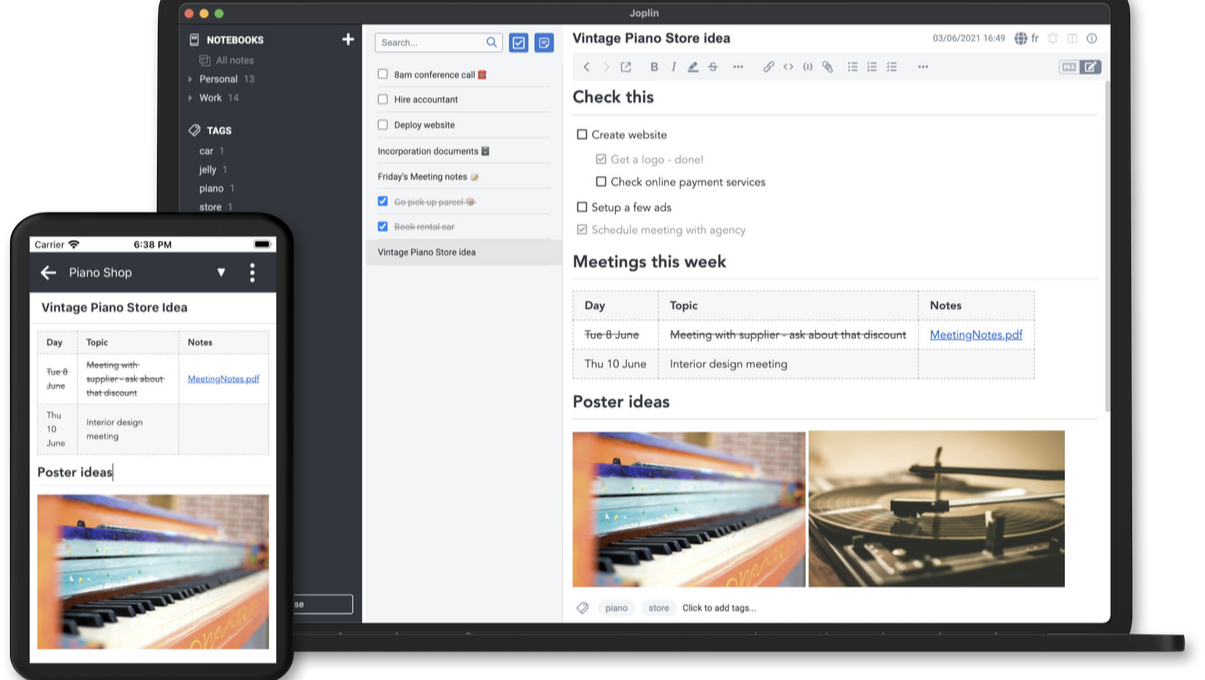 Most of the Joplin project  is under an open source (MIT) license, including the mob… Laurent Cozic needs your support for Software license for Joplin Server

Great opportunity to give something back to the project! Thanks for everything!

A newbie to gofundme here. Couldn't find Russia or Ukraine in the list of countries with postal codes. So, had to go with Paypal (Transaction ID: 20797613886741618 / 4NT21994BT550390V). Not sure if it could be accounted in the crowdfunding campaign on gofundme. Just wanted to attribute morally these 10 EUR to it.

Many thanks for your effort!

Thanks for your support!

You make good points about funding for open source projects, but the difficulty is that setting up this kind of campaign with an amount that is known in advance is difficult in the general case.

As for bounties, I'm still not convinced that it works at all. I've tried once to implement a feature that had a bounty on it (The PortableApps package). It was done, I've tried to claim the bounty but never got it, so that was the end of it as far as I'm concerned. Also it's hard to put an amount on a feature. How do you calculate how much it's worth?

Also when money is involved there's an incentive to drop half done pull requests on us, hoping it's enough to get it merged and claim the bounty. But of course that won't work, so we'll have never ending back and forth between us, who want quality, and the bounty hunter, who just wants to get that merged quickly and get his money.

So yes, I don't have a very positive view on bounties, but I'd be glad to be proven wrong!

Personally, I find funding bounties (and campaigns) to be much more appealing due to tangible impact on development future. I wish there are more funding campaigns and bounties I could vote for with a wallet. I understand that current and past recurring expenses can't be covered this way yet I still would like splitting donation piles into groups (like bug fixes, server improvements, UI development, "donateable" roadmap, etc)

Hi,
I donated, I like the idea of a collaborative funded licence. I hope money target will be enough to get the good licence that fits the project.
Good luck,
Bruno

I don't use the Joplin server, but I use and appreciate the project so I've donated.

Glad to be late
As now my donation could finally make this goal reached.
THANK YOU FOR JOPLIN!!!!!!!!!!!!
WHAT A GREAT PROGRAM

Indeed we already got there in just one week. Many thanks to everybody who's contributed! I will contact back the lawyer soon and will keep you informed.

The goal has been reached now and even exceeded, thanks so much everyone for your help with this!

The next step then is write the new software license, and for this I have now hired DIMOV, an internet law consulting firm based in Brussels, which has extensive experience writing this kind of documents.

The license text went through a few iterations already and I think is nearly ready now. I thought I'd share it here in case someone has any questions or suggestions about it?

It's not as concise as I would have hoped but I think it covers well the allowed and disallowed usages.

Just casually proof reading the doc, not trying to stir a trouble

By way of illustration, the Licensee is not allowed to:
vi. Use the Software or grant other the right to use the Software in a way that generates income or commercial profits.

Does a CEO of non-profit organization sharing the server among employees (free of charge) regard as personal and non commercial use?

Can a non-profit use the server for its recipients? say they give away laptops to children, can they provide the server service (free of charge) for preinstalled Joplin clients?

The same situation but with government related institutions (university/hospital)?

Here I'm pointing at the profits/income part: as long as you're providing public service (i.e. running at an intended loss), you can use the software. Is this reading true? if so, is it intended?

By way of illustration, the Licensee is not allowed to:
v. Grant access to the Software to others for a fee or free of charge if the Licensee is a legal or natural person engaged in commercial activities;

so, does viewing (and collaborating) a note shared publicly with Joplin Server count as using the software?

In other words, yes, you shouldn't give access a person performing commercial activity, but if you share a note on the internet, it is at least scanned by crawlers, running by commercial businesses.
And what if (by accident) the note will be viewed by an employee of commercial business? Is there a breach? Does collaborating with commercial entity count as a breach?

Those are good questions, but quite hard to answer to each of them in details. I expect that if some org contacts me and have a particular use case in mind and questions similar to yours we can discuss it at that time. The goal is to allow casual use, which I think is what's most common, and disallow obvious commercial use.

I've a few concerns that I think are probably actionable

There's also specific bits of the acceptable use policy that I think are overkill, e.g:

If the server has a bug that I can fix on my machine, I'm now not allowed to.

Again, this makes sense in Joplin Cloud, it doesn't make sense in Joplin Server. It means that definitions of Cyber Offences and Unauthorised Access are defined by English law, even when it's running outside of England on someones Raspberry Pi in the attic.

You can see instead an proper grammatical and used here

It's clear that these are entirely independent. Unlike e.g,

This implicitly defines a lot of the context of commercial use. But I don't think for example you're going to want "modifying", because it would deny Github contributions. Similarly, reproducing & publishing would deny users making alternate Docker releases. You could argue the mere presence of submitting to DockerHub would be giving Docker commercial influence via popularity. It leaves a lot open to interpretation.

Of course practically, there's an preference for people to be using the official releases of the software to ease support. But I don't think the this document has the balance that I assume you were hoping for.

Thanks for the feedback @james-carroll. Trimming down the license would be good so I'll look if these parts can be changed or removed.

The final license, which includes some of the changes mentioned by James Carroll, is now live:

It was more work than I would have hoped but I think the end result is quite good. It should still allow anyone, like before, to self host Joplin Server, while also restricting commercial use. I don't expect it will be changed further unless there's something obviously very wrong with it.

In any case, thanks everyone for your support to get there!

To focus on the positives, it's definitely good for the purpose which it was designed. The extreme majority of people will have no issues with the license, and the possibility for exploitative commercialisation on someone elses infrastructure is clearly dealt with. There's a big success there and it's money well spent.

The negatives would only effect a ridiculously small subset of people (e.g people like myself who might be keen to attempt repackaging it, or people who might want to hack on it directly). 99.9% of the users won't be doing that. If I've sounded negative so far, it's only because as part of the small minority, it's annoying when you end up crossing licensing terms on very minor issues (sometimes at the level of single words!).

I'm glad to see the lawyers agreed with removing the AUP. The lack of changes to the illustrations in 2.3 weren't that important (they are just illustrations, not actual terms by themselves). And while it's unfortunate that there isn't e.g an explicit grant to repackage the software; the end result is absolutely fine for the incredibly vast majority.

The license actually allows modifying the software, as long as it's not for commercial purposes, so I think the current Docker images should be fine (such as the alternative AMR release).