It would be useful to be able to set default note that opens when you open the app. I realize many people like to return to note they had open last time, so Joplin could have a setting like the browsers do.

What does "where I left off" mean precisely? I'm not getting the browser analogy as so far as I can tell Joplin (like Evernote) is a one-note-at-a-time design Are you talking about preserving the history of back/forward actions?

As to opening to a view of a specific note, I've been using Benji300's joplin-favorites plugin with much happiness so commonly viewed (rather than edited) notes are a click away. Meanwhile my notes list is already sorting on modification time so whichever note I was actually working on is already opened at startup. Our workflows are probably different -- I almost never use a mobile client for example -- so I'd like more info on the itch you want to scratch.

It simply means "open the note I had open last time when I closed Joplin", i.e. how it works currently. While on desktop client it doesn't bother me as much, but on mobile I often just want to make a quick note when I'm out and about and instead of one click open joplin and make a note, I'm four clicks away probably in a wrong notebook and wrong note an it can really break the flow when you have to figure yourself into the correct note.

Now that I think about it, a related feature that might be more useful and serve the same purpose would be if I could create shortcut to a specific link both on desktop and mobile, so I could have my "quick notes" shortcut on my phone's home screen.

Thank you for your question, as this prompted me to think about whan I really want from the feature. For mobile this request seems to exist already.

It simply means "open the note I had open last time when I closed Joplin", i.e. how it works currently

I have never understood the rationale behind this behaviour. Do you know if it is intentional? This is almost never the note that I would want to have open.

While on desktop client it doesn't bother me as much, but on mobile I often just want to make a quick note when I'm out and about and instead of one click open joplin and make a note , I'm four clicks away

No idea, probably not intentional. If you usually edit notes then I suppose most of the time you will get the last open note just because it's be the most recently changed

But isn't it the most recently created note in the folder of the last note opened? I can say that for me it almost never opens to the last note I had open. 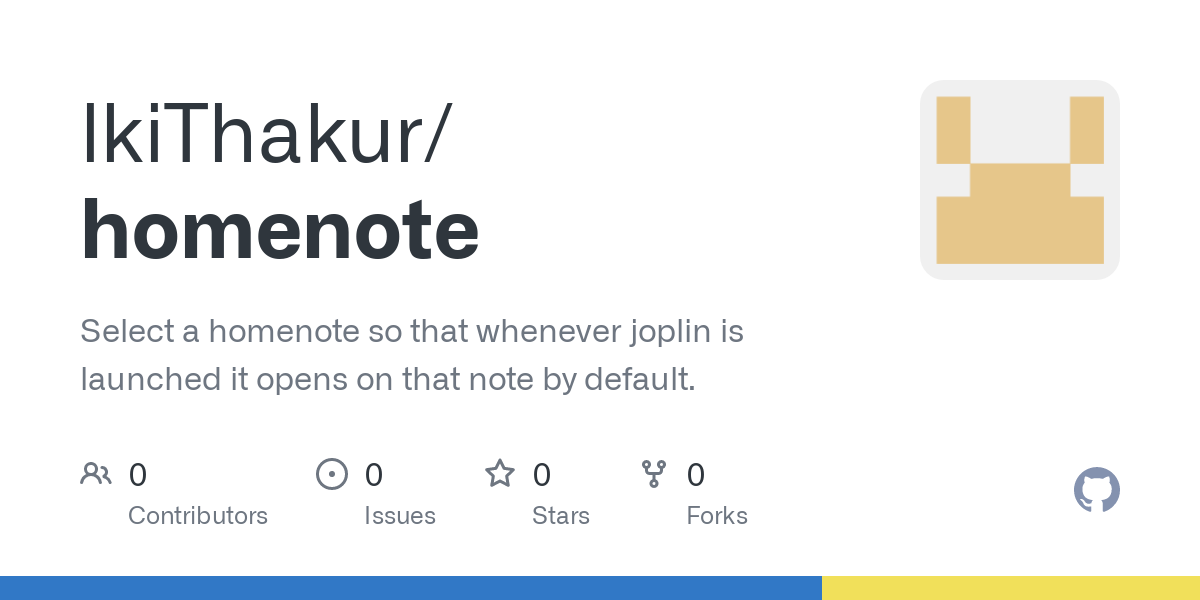 Contribute to lkiThakur/homenote development by creating an account on GitHub.

This plugin adds an icon on the toolbar which can be clicked while any note is opened to set that note as default home note .

On next launch of joplin that note will be opened automatically regardless of which was the last opened note.
This plugin is very raw as of now and I will polish it this weekend if someone finds it useful.
Not published on npm yet.

This is nice but I feel this should be done in the app itself. If nothing else then just so it's also available on mobile.

This topic was automatically closed 60 days after the last reply. New replies are no longer allowed.