There was a feature request open or even a PR that should have reduced the background color for sub notebooks by 5%. I don’t know what happened to it. @laurent, do you recall that discussion? I think that was actually not a bad idea

Some of the examples i saw at that time were pretty good indeed. I’d definitely accept a PR with this.

I started a PR with this morning. Here is the progress so far 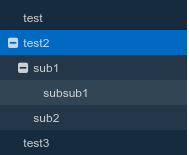 Right now I have the notebooks getting lighter with depth, but would darker be preferred?

Nice. Going darker is probably harder to do, because after 2 levels you will be at black already

I can't recall if the discussion was going on on gh or in the forum, but the screenshots and the mockups were quite nice. I'll try to find that post.

Darker would be preferred with maybe an indicator like ┗ or something. It might be a help for older people or people with aging eyesight.

Can you please explain to me how you go darker when the deafult sidebar background color is already very dark? I was not joking, after 2 levels it’s going to be black. This makes no sense. Either you want to have a clear distinction of levels or not.
I certainly do not want the notebook sidebar background to be changed to white.

Here's the link to the previous discussion about this topic:

I like the idea of a cutoff level, and it probably should be pretty small so you don’t have to worry about when to change the font color from white to dark. I also agree with zblesk-- if someone had that many sublevels they’d have to be doing all their navigation by searching terms or tags anyway, so colors wouldn’t be useful there and they would likely just turn the coloring feature off. I like the first mockup better too. Let me make one more, sampling those exact colors (as I noted I think…

I didn’t phrase it correctly, my bad. I meant don’t lighten the subnotebooks. Just use the same white we’re used to with maybe pipe indicators.

PS: As an example, if you have a Windows installation available, go to a folder (preferably with subfolders).Shift+Right Click, open cmd and do a tree /f command.

Here's where that thread ended, with what I still hope will be an implemented feature 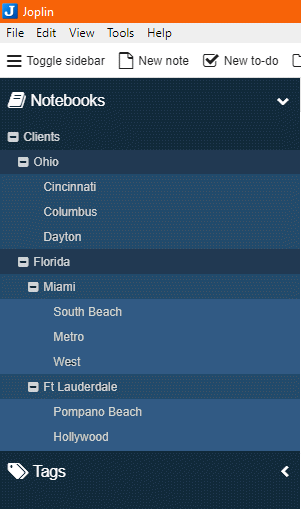 This is probably too complicated to implement, but maybe I'm wrong.

Ah, I see. Looks not bad either, but I prefer the other variant, since it's going to be too much white, when you have more than just one notenook open (on level 1). But this is a matter of taste, and as you know, there's no accounting for taste. So I guess we'll have to wait and see how it's going to be implemented.
Maybe it's even possible to make this configurable. But I guess this would make it only more complex.

Again, I dunno what is wrong with me today. I’m using a lot of badly phrased sentences. Apologies.

I meant, I liked that idea with the current Joplin colours that is.

Or you can start with light and go darker. The link you sent showed that as soon as click on a notebook, the entire notebook switches to a white background color, which goes darker per level within that notebook.

So how would you use Joplin colors for option 2? If you start with light, you have to start with white or a very faint blue/marine (close to white).

Highlight notebooks based on depth

This is probably too complicated to implement, but maybe I’m wrong.

I chose to highlight the background because this was the more difficult option, but it’s probably still fairly simple as long as we use straight pipes |.

I certainly love to have as many options as possible (even if they are hidden or masked behind an expert switch), but that’s just me. But I am not the one who makes the decisions. I believe Laurent wants to keep it simple as to not confuse users with a myriad of options.

Joplin has developed rapidly in the last few months. I had stopped using it because of its interface which I feel is rather awkward compared to mainstream note-taking applications. However, Joplin is really very useful and I’ve seen some nice changes in the UI.

My suggestions on the UI were posted here: Suggestions for improvement Suggestions #1-5 are features of outliners that I’ve been seeking for over 10 years. In short, the user interfaces used by ActionOutline, MyInfo, MyBase, RightNote are proven designs: they make optimal use of screen space and provide the user with an instant understanding of note categories, subheadings and their contents.

It would be nice to have sub-notes, or ability to group few notes(in a notebook) together, without creating a specific tag for them. Really useful when I am researching a topic and have multiple notes related to that topic.

I find that this is easily replaced by making a 'hub' note.
You can group notes simply by creating a note, and adding links to different notes, with comments as needed.
This is very flexible, as you can assign a note to different hubs, you can make a bigger hub for a topic linking to sub-hubs, etc.
By now I have quite a few of these. I have also created a top-level one, which links to most other hubs.

I like this, because it works for arbitrarily complex scenarios, it's quick to modify or reorganize, and it's really easy to find whatever I'm looking for. If I don't quite know where to start, I just go to the top level hub and follow links from there. And it doesn't require any additional features that would unnecessarily overcomplicate Joplin.

True that is absolutely possible, but there are a few disadvantages I feel.

A good tool I found that does allow you to group notes is Trilium.

I am not sure if it does overcomplicate the app; rather i feel it would simply my work a lot

Wouldnt it be a matter of adding a parent-note attribute to the note? like notebook -> note -> subnote.

Although not sure how it would look on the UI side.

another way could be select few notes, right click and Group notes together would also look nice. We already have a "Combine Selected Notes'

Not sure if this is what you are referring to already as I'm not overly familiar with Trilium but it also has a feature I really like which is the clone notes where you essentially create duplicates which share the same source note. There is no "original" or "clone", all clones of a note are the same and you can edit that note from any of the entries.

Yes @Daeraxa this is different. But this seems like a very nice feature, just like symlinks in linux, wasnt aware of this.