I use notebooks pretty extensively, and having the notebook information discarded when there is a conflict makes this process very annoying. If there is a real conflict, I need to go and find the other note to resolve that conflict, and without information about the original notebook I have to search for a similarly-named note, which doesn't work if I use a standard notebook template, e.g. "Project Status" note in a per-project notebook.

This is agitated for me by another bug that I have been living with for months now, where notes older than a certain age will appear as conflicted when they are modified. The conflict is fake: there's only one copy of the note and it lives in the "Conflicts" pseudo-notebook, so I just have to move it back to the correct notebook. Except, again, the original notebook name has been discarded.

My feature request: instead of a magic notebook, Conflicts should be implemented as a fake tag. This is advantageous because tags can be added without loss of other note information. The UI can display the magic tag specially, similarly to the current magic notebook implementation.

No solution is perfect - a magic tag might solve some issues and bring on new ones, not to mention the significant development effort.

We don't lose any information when a conflict happens actually - the original notebook ID is still there with the note, so maybe it's a matter of displaying the notebook title somewhere so that it's easier to restore the note to its original notebook.

If it is presently displayed somewhere or even accessible, I would have a much easier time with this. Is that the case? Am I just missing something?

I agree, even displaying the original notebook would alleviate this frustration for me.

I looked into that plugin, but neither the README nor the screenshot doesn't seem to list the notebook anywhere, so I didn't think it would help. Is this something I'm missing? Again, there is no conflict; I am "syncing" with one device only; there is no "original note" to compare to; a line-by-line diff would show "no changes". It really did not seem like it was going to help me.

Yeah, the sync server is definitely bugged, but I've had so much difficulty with Joplin sync in the past that I'm not going to bother trying to fix it until I see some news of a major sync development. I'm using sync server 2.5.1 on a dedicated instance with no other users; I've recreated my collection at least once in the past to try to sidestep sync issues; the state it's in now is "good enough" where I only have to deal with one minor annoyance, and it wouldn't even bother me if only Joplin displayed which notebook it pulled my note out of.

It really did not seem like it was going to help me.

So close! I think since it's not actually a real conflict the conflict resolution plugin doesn't work. Here's what happens when I try to use the "Resolve Conflict" button. 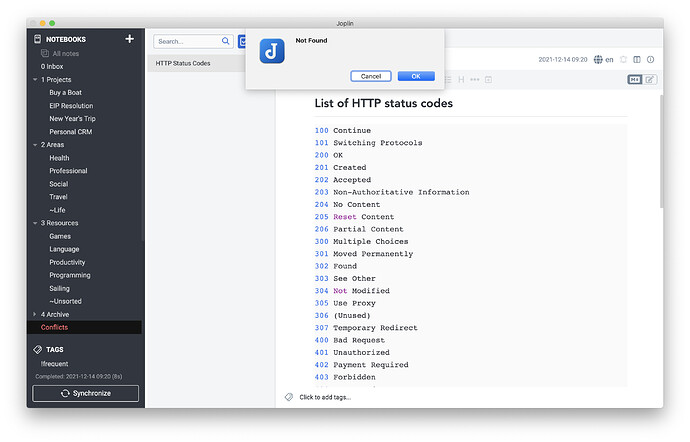 I've attached the log file, on the off chance you develop that plugin and want to identify why it's happening. Or perhaps it's useful for someone debugging the sync server in the future, but like I said that's mostly a minor annoyance for me. If Laurent is still reading this thread, please consider not logging the cipher text, public, and private keys in the world-readable log file.

My main request here is still mostly the same: please tell me what notebook the conflicted note is from, so I can put it back there.

I found: Go to Help > Open parameter folder, and I see a log.txt file.

If Laurent is still reading this thread, please consider not logging the cipher text, public, and private keys in the world-readable log file.

I just checked my log.txt file and I can't find mention of my master password

Maybe it is fixed?