Both approaches have the same disadvantages actually. With Joplin Server, it would manage sharing, etc. but it will also need to manage your sync items, so you can’t use it next to Dropbox, Nextcloud or anything - it’s an all or nothing.

So in the end, it was making more sense to make a Nextcloud app. Also it already handles user authentication, file access, sharing, database and other features needed for this, so it’s also a lot less effort.

I’m glad this is being worked on.

In this scenario Nextcloud takes the spot of the recommended way to sync.

Yes I believe though. I'm developing it in such a way that the Joplin stuff is decoupled from the Nextcloud backend so that potentially the app could be used separately (for example on an Apache or Nginx WebDAV server), but initially it will just be for Nextcloud. Dropbox and OneDrive unfortunately won't be supported I think.

would this allow something like rest_uploader to upload directly nextcloud? I.e., does it expose the webclipper API?

would this allow something like rest_uploader to upload directly nextcloud? I.e., does it expose the webclipper API

No, as a general rule if something can be done by the desktop (or mobile) client that's how it will be done. So if OCR is ever supported it will be part of the desktop app.

I have just noticed that the topic was split.
I'm currently updating the GSoC application. In the course of this, I would like to publish the first project idea.
Porting the web-app or have a Nextcloud app created would be the idea.
Now we have this here

In general, it is needed

Currently, I don't know how to describe the project(s)

.
Whatever going to happen, it should be done in such a way that Joplin is not limited to be used with Nextcloud only, when you want to integrate it into another collaboration app.
Of course, Nextcloud would be the pilot and thus the one with the most drive most likely.

description should be as described in

I don’t think there’s a special format but it could simply be a Markdown file with these sections: Abstract: in 2-3 lines, what the project is about, why it’s needed. Specifications: as much details as possible about the feature. I think your post above is pretty much it. External links: a link to the discussion here, or any other link you can find related to the feature. As I understand, they want to see that there’s interest around the feature and discussions happening so that would b…

I installed the pre-release of Joplin that adds note sharing capabilities. I also installed the Nextcloud app. When I check the status via sync settings in Joplin I get “Beta: Joplin Nextcloud App status: OK”. When I share a note, the fields in the Nextcloud app populate. Opening the public share link, however, results in a 404.

If you click on the Joplin icon in Nextcloud, what does the status page says? Is there a sync target and “share” row? 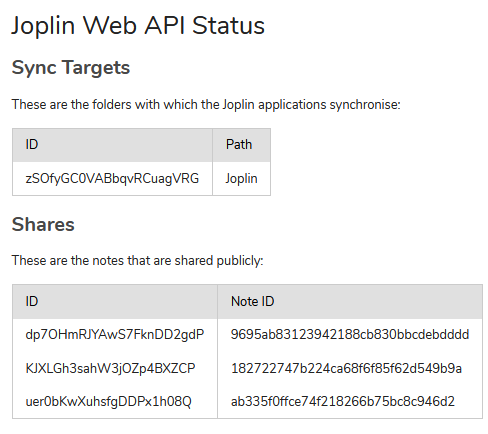 Hmm, that’s weird. Could you post a screenshot of the 404 error too please? It seems to be Nextcloud that can’t find the page then. Also what’s the URL you get for sharing? (you can remove the domain name)

My Nextcloud instance is based on the snap package. The Nextcloud version is 16.0.5.

The "extra-apps" part is strange as normally apps are under just "apps". Does it work if you change this part to "apps"? As in:

It does not.
However changing it to https://cloud.example.com/index.php/apps/joplin/shares/dp7OHmRJYAwS7FknDD2gdP (include index.php) works.

At first glance there are a couple of issues with the rendered markdown (which I guess is to be expected at such an early stage):

And when you click on the Joplin icon, what url does it give you? Also apps/joplin or extra-apps/ joplin?

Yes indeed I’m aware of the issues you mentioned, the viewer is for now very basic.

Ok thanks @Shamp0o. Probably the logic I use to get the app URL is not right then, I’ll check that.

@Shamp0o could you give a try to the last version and see if it works for you?

Btw, is there any way to remove shares or to get share-links of previous shares at this point?

Could you check the source code and see what's the url of markdown-it please?

This gives me another 404

changing it to https://cloud.example.com/extra-apps/joplin/js/markdown-it.js gives me the js file