So far, I really like Code Mirror. I am not sure really why to be honest, other than it is a bit prettier. Maybe that is all I needed.

But I see little glitches here and there. But I am really having trouble replicating things reliably (isn’t that so often the case?). What I have seen …

Note: I haven’t altered the CSS in userchrome.css at all. Nor userstyle.css for that matter. FYI: RFE – a default set of CSS populated in the .config/joplin-desktop directory, so that we don’t have to re-remember how to customize the CSS. I can’t recall how to look up the tags and elements and IDs and classes anymore. I digress.

Thanks for reporting this, I also like the codemirror editor so I want to make sure it’s as solid as possible (more solid than ace editor).

Nope. The issue doesn’t seem to appear (at least not yet) with the Ace Editor. The Ace Editor is also all one fontsize. Maybe that has something to do with it?

Found another thing. It’s not a bug, just a step back, IMHO: code blocks were syntax highlighted in the Ace Editor. Not so in Code Mirror. Just create a CSS codeblock for example.

Should produce something that looks like how it renders (excuse my hacked demonstration attempt here):

Look at it in Ace. Then look at it in Code Mirror. Not the end of the world (the rendering ends up highlighted, just not in the editor).

Side note: I find it interesting that discourse does not support wrapping ``` blocks in ```'s. I had to explicitely use HTML <pre> tags.

Found another thing. It’s not a bug, just a step back, IMHO: code blocks were syntax highlighted in the Ace Editor. Not so in Code Mirror. Just create a CSS codeblock for example.

Interesting! I didn’t realize that code blocks were ever syntax highlighted in AceEditor! Actually codemirror supports more syntax highlighting than aceeditor, but you have to manually specify each language. I added a few to start (try javascript or python) but neglected to add css. Eventually I want to add every supported language (including css). Thanks!

edit: btw here are the languages that can be supported

GitHub has a supported list somewhere. I think ace does as well.

So I guess we should at least support those in Ace Editor, but it can be more than that too. Ideally we’d add support for let’s say the top 50 most popular languages but it’s difficult to find such a list.

Sorry. I'm jumping around threads. Yeah, some zero highlight mode (plaintext or whatever) is a must. Personally, I wish the various editors would just treat unadorned ``` as no highlight. Hey! We have that now with Code Mirror.

Otherwise, top languages to start. Also markup schemas (TeX, reStructured text, docbook, etc). Anyway. Some kind of prioritized support and then let others slowly be added? Is it a PITA to just support "everything"? Is it a size issue?

A. The bounce of the cursor is annoying. There is enough already in this application.
B. It indents 4 spaces. Which, since this is a markdown editor, that fancy HTML I wrote is suddenly a text block and the HTML is ignored.

I can’t reproduce this, when is it indenting for you?

Span is probably not the best example, but … I just did a quick example and screenshotted it. See attached. 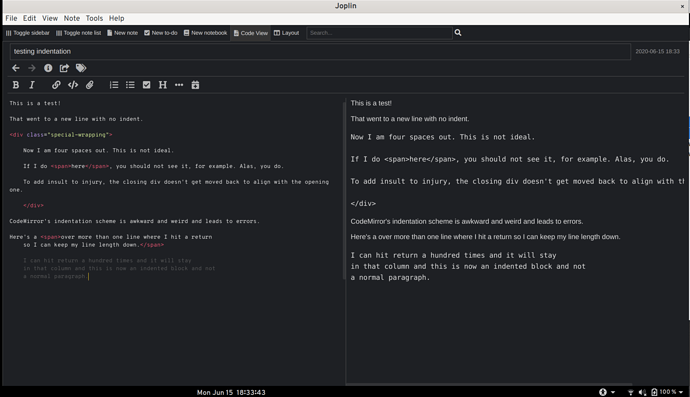 Yes that makes more sense! I’ll look into this, should be pretty easy to disable. Thanks.

Good news! I was able to reliably reproduce this and have prepared a fix! Take a look on github

And as an update for what you have reported, I still haven’t been able to reproduce issue number 1 (slow loading note in editor). The syntax highlighting (and loading css in general) is next on my codemirror todo list!

(I'm not sure if you are aware about this issue)
In the "Code Mirror" presentation there is a part about search :

I activate code mirror but it don't put in brightening the searches, and markdown syntax are not searched inside one note, and also with Ctrl+G

That announcement is saying that it will be possible to add that behaviour, it is currently not implemented. You can follow the progress on github.

Thanks you, that's a good info