This plugin parses Bible citations and renders the verses from an osis Bible file:

You can display multiple citations in the same block:

You can reference multiple verses, chapters or books within the same citation, separating verses with commas, chapters with semicolons and books with spaces. For example, the following citations are valid:

The plugin features the option to display multiple versions: 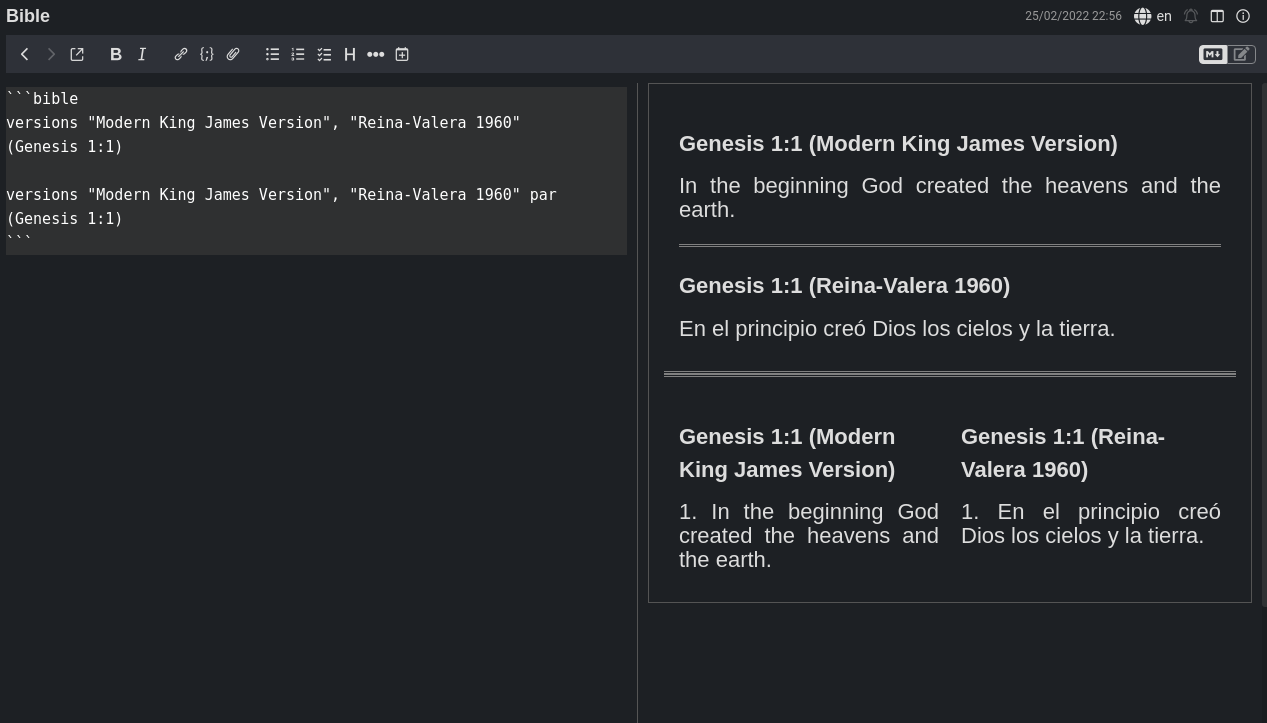 To display all the available commands type the word "help" in a block: 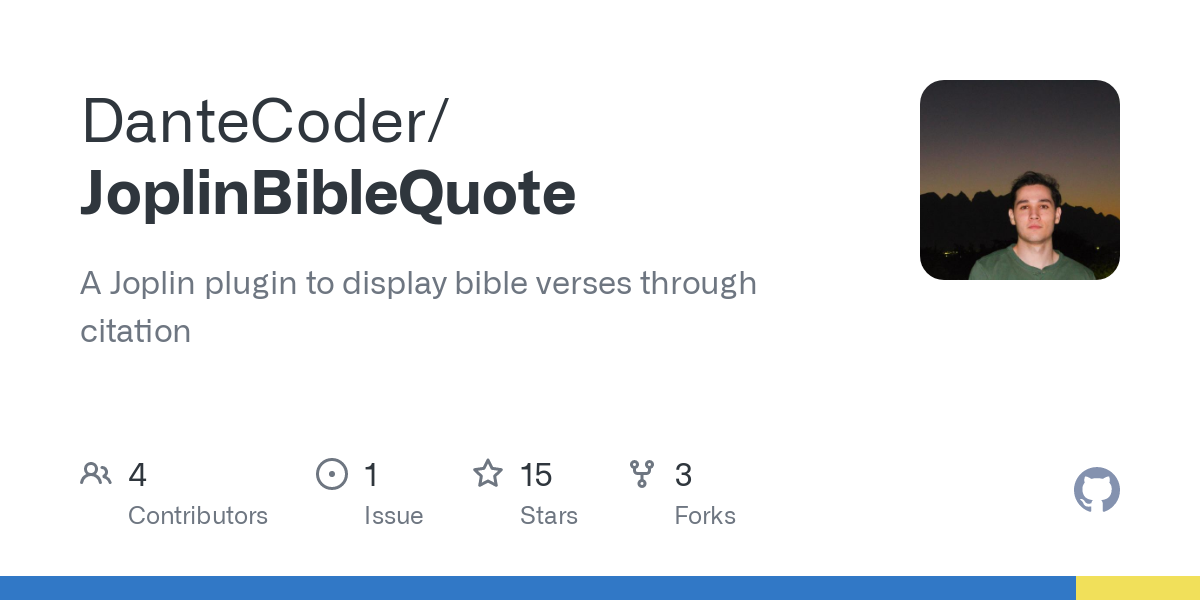 Cool! Thanks for making this. Have you added it to the official repository?

No real need, but would be a fun exercise:

And with the right plugins: show a graph.

But you know, just because it can be done.

@DanteCoder Any ideas on why the plugin isn't working for me? I've tried various xml files but to no avail. (See my post above from 3 days ago.) Thanks.

One could imagine a similar plugin for Marx's capital

What am I doing wrong? The plugin is correctly installed.

Also, where can i find the .xml files? I would like to add the latin Vulgate bible.

Yes, the bibles are in the source code. I think that you have to recompile it changing the path to the xml bible in OSIS format.
Im looking for help to add an option to select a desired bible file from settings.

The xml file has to be in OSIS format. I added some bibles in that format in the source code. But if you would like to add a new bible you have to recompile changing the path to you OSIS bible.
I want to fix that but as i'm very new to programming I would use some help to add an option to select the bible file from the settings.

Not yet, as the plugin It's in its first stages and I think there is some work to do. btw how can I add it to the official repo? I'm very new to the Joplin community.
Thanks

Would be nice to convert e-Sword bblx files to work with this plug-in.

There is a program to convern any bible format from one another. It's called " Church Software: Simple Bible Reader / Converter"
I used that software to convert a normal xml bible to osis xml, but I think it supports e-Sword bibles.

I would use some help to add an option to select the bible file from the settings.

Another issue is that the bibleIndex is only in Spanish. This would have to be adapted as well. I looked at your code and it is not bad for someone who started programming. I suggest to look at certain programming patterns, but I am also thinking that there are people visiting this forum who can help.

I'd love to help, but I haven't even found the time to write the Trash plugin yet. I have parts of it in my head, but other parts still have to be figured out, b/c the API most likely does not support what I want to do. Thus I might have to add that to the API first, which is an enhancement to the core code which I did not plan to do for the plugin. (And it is not clear, whether such a change would be accepted.)

@skim1124
I made a lot of bug fixes on the plugin.
Try the new version 0.3.0 under releases and let me know if it works for you!
But before trying anything please read the README in my repository.

Now I also added english support!
I hadn't added it because I couldn't pass the settings values to the markdown plugin, but now I found a way around to make it work. I'll post what I did on my other post.

I fixed some issues with the code. Please read the README in my repository and try the new version 0.3.0.
Let me know if it works for you!

btw how can I add it to the official repo?

I think this post has information, but it may be out of date:

Official Joplin plugin repository is now ready! If you are developing a plugin please read on Development

Following this discussion, it was eventually decided to leverage npmjs package repository to publish Joplin plugins. Then a script is used to fetch these plugins and move them to the official plugin repository: This repository will then be used to load the list of plugins in the main app, and install and update them directly. If you are a plugin developer, please consider running yo joplin --update from the root of your repository, and let me know if you notice any issue. Once that's done, y…

Thanks. The Simple Bible Reader solved the problem. It converted the xml file to an OSIS xml file (I don't know what that means, but it works), and now it's working as intended. Thanks again for a very cool plugin.

Would it be possible to add options for displaying the name of the book and chapter differently. For example, most of the time I'd prefer to see the reference on one line, rather than two lines (e.g. Genesis 1:1-3).

how can I add it to the official repo?

Please make sure that the versions are the same in manifest.json and package.json.
I can have a look at the files before you want to publish your plugin to npm, if you want.

I had the same thought when I started the plugin, but at first I implemented it as it is now because of simplicity; but now I'm working on a feature to allow the selection of the display format as you say.