Atom has a really nice "welcome" & "Welcome guide" that can be dismissed, maintained, or shown again (via command palette) which I think is a nice step above the default markdown notes supplied with a new Joplin install and could perhaps have tighter integration with forums, wiki, docs etc.

Great ideas, I will make a mockup and post it. We can discuss it.

I´m a UI Designer, so I can help. Also animations with After Effects are no problem!

Btw could we split welcome page and design mockups to a separate thread?
Just to keep things consistent with the stated topic. What do you think?

Btw could we split welcome page and design mockups to a separate thread?
Just to keep things consistent with the stated topic. What do you think?

Mockup below - pretty much the first time I've really tried to actually make something from scratch using html and css so it was a fun little distraction.

I should point out in no way am I any kind of UI designer, web designer, developer etc., just an idiot with a keyboard, nor have I designed... anything really before bar using MS paint to throw some random things together.

I basically just "borrowed" some designs from a couple of different applications and threw on some stuff themed on the Joplin website. I think the logo is a tad big and some of the scale is a little off when I've mashed it up into Joplin with GIMP but I've run out of time to play at the moment, interested to see what people think.

Not bad. It would really be handy.

Just brainstorming: Would it be possible/smart to show actual feature discussions out of the community?
So that you accidentally read about a feature that catches you and you go into the community to discuss?

With the current system it means there is little in the way of overhead of managing features but I understand that it can feel frustrating to request a feature or give ideas but have little in the way of feedback only to see the topic close. At the moment system wouldn't really allow for an easy "features digest" etc. unless manually curated.

One idea could be to have an opt-in page (startup/via command/linked in the note list), similar to the welcome page concept, which instead would be a community focused page which could fetch some kind of summary report from discourse (either auto or curated). Could also be used to go into details for the current release with a verbosity not really possible in the brief change log given on github or "update available" dialog in Joplin.

On the discussion of the initial topic I've shoved my... creation... onto github for all to publicly point and gawk at.
I'll reiterate, literally never made anything in HTML (or CSS) from scratch before, have no idea about best practices etc. It is entirely fuelled off boring work meetings and, later, gin.
Yes there are CSS selectors that don't have anything in them (thought I might want to use them later) and yes it doesn't do responsive stuff properly (no flexboxes etc.) as it is purely meant to be a mockup & a fun little distraction project for me and is by no means meant to be something finished. 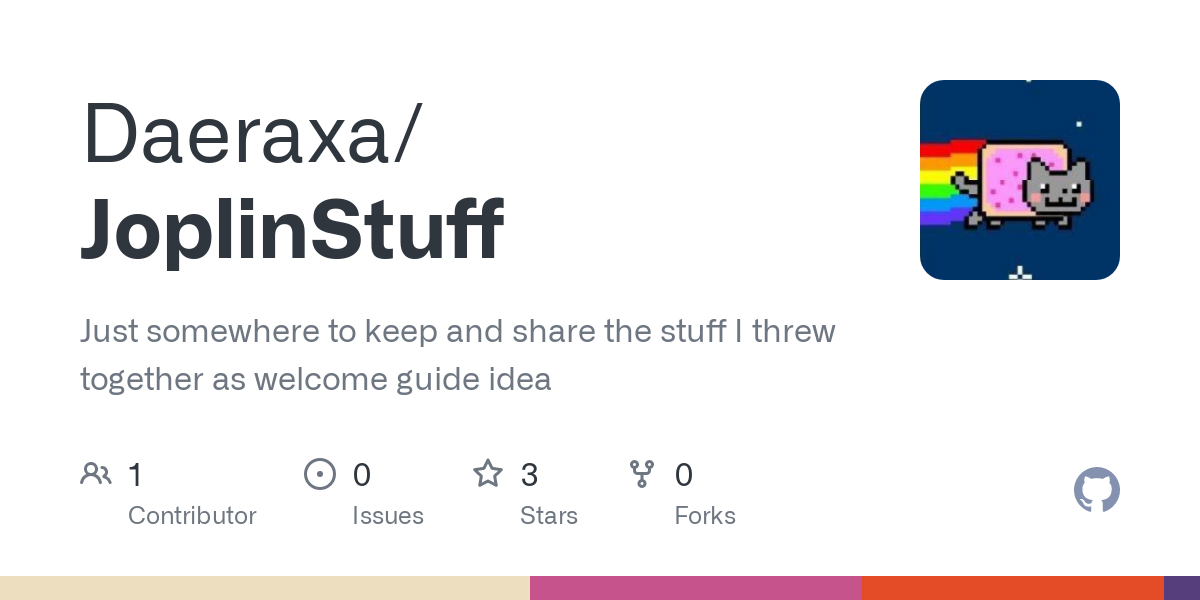 GitHub - Daeraxa/JoplinWelcome: Just somewhere to keep and share the stuff I...

I thought about to use this "Sync provider"-layer for a first-time once message to get more people participate. A little humor could help to get people involved.

I think offering help is more welcoming than asking for support in the first place.
If I were a new user, I would not want to get roped in discussions before I was able to check the program, it‘s design and features.

We could simply ask in the first default page for participation.