The current Joplin mobile app is designed for mobile phones. On wider screens like tablet devices, a layout that takes advantage of the extra screen space is needed. I plan to take a progressive enhancement approach in my solution. I plan to build on the current mobile layout and make more features show up when the app detects extra screen space.

To implement a layout that:

Here's a summary of my approach to solving this problem: 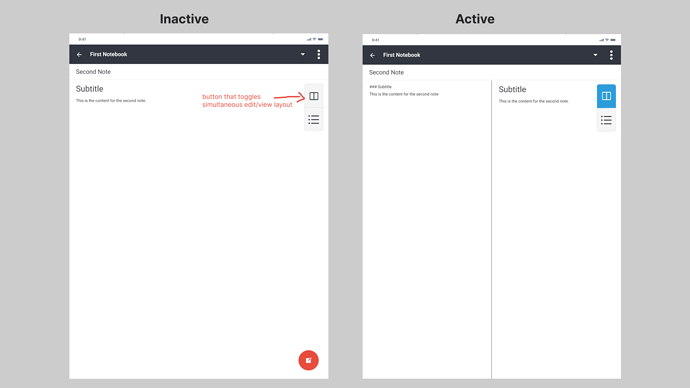 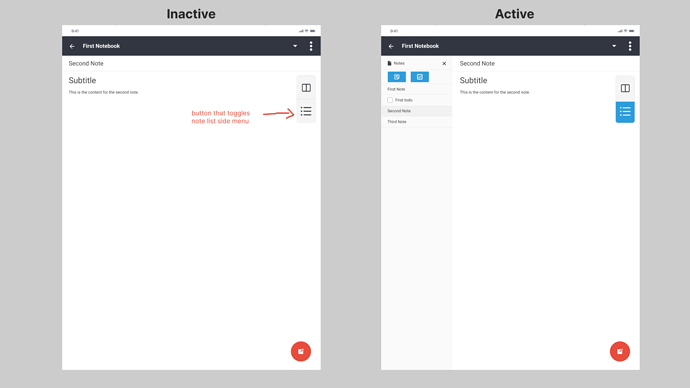 Suggestions and feedback are welcome. Thank you.

Thanks for information, it makes sense. One thing is that rather than provide Figma links, please provide a series a screenshots showing the different UI states, otherwise it may be hard to find out what you mean (for example I've tried randomly clicking on Figma but I didn't see the menu).

The schedule seems ok but please could you break it down into smaller parts - maybe week by week? Also I don't believe you'll need to write documentation for this.

One thing to keep in mind is that a good part of the existing mobile UI code is old and written in JS, however new code should be written in TypeScript. So you may have to convert old files to TypeScript before modifying them - it probably won't be too difficult but still something you'll need to consider.

I've long wished that Joplin UX would improve on tablet & phone. Thanks for taking a few steps in that direction, good luck! The mockups look great!

Thanks for the update. Feel free to update the top post with the new version.

I don't have the permissions to edit the top post anymore, that's why I flagged it. I'd like to delete it.

I've increased your trust level @ToluMals, could you try again to edit the post please?

I updated the UI design of the note list sidebar to include a search bar. It will be useful for notebooks with alot of notes and todos. 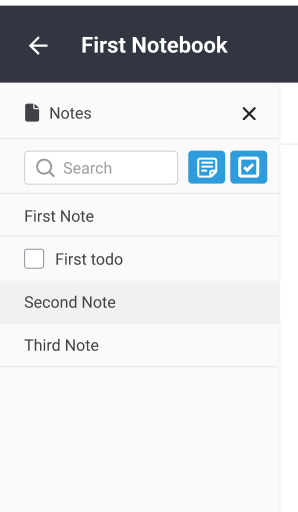 BTW it'd be great if you can make note and notebook titles a bit higher. When trying to tap on one note, the row is a bit small for big fingers. Other tactile apps usually have bigger entries.

@Yajo Noted. I'll make sure the note titles in the side bar that I'm about to implement are large enough.

But to change the height of note and notebook titles in other parts of the app, I think the ideal process is to create a topic that addresses this and then an issue will be created, and it can be worked on.

One thing that I always wanted in the mobile app (phone or tablet) is to see the status of the current note while I'm working on it. Is it synced with the server? Is there any pending changes that need to be synced? Or is it currently in the process of syncing with the server?

This would be shown in small button, somewhere in the top bar. Tapping the button would start a sync process. In other words, it act in a similar way as a Save button that also show you if the document needs to be saved or not.

This would help reduce the main source of conflicted changes, by providing clear visual feedback. Too often I've had conflicts while working on my phone, then closing the app thinking that my changes were sent on the server, then editing that note on another device, only to discovers hours later that not all my work from the first device was sent to the server, and now I have to merge a bunch of conflicts.

If you want, I can provide some visual mockups for what I have in mind!

Great! I was hoping for a big change in the mobile apps department especially the tablet. Will this also be updated for iPads (iOS)?

To be honest the mobile UI,s is what is holding me back on making the switch to Joplin from Standardnotes. So I really hope this change will convince me to make the switch.

Yes, the change will affect iPads as well.

I just checked your figma sketches and I was really happy to see that eye button to go back to view mode. I am really looking forward to any improvement here, thank you.

Did you consider to add some gestures?

No I haven't considered adding gestures. But I'll keep it in mind, now that you've brought it to my attention.

I recently ran into some issues while working on the split layout functionality and view note button. ( Split Layout PR). There's a detailed explanation below:

So I'll need to set the position of the view note button depending on whether it's an IOS device or Android device, then I'll also need to get the button to avoid the Keyboard or alternatively find a package that satisfies the needed requirements.

@personalizedrefriger Do you know why this might have happened?

The split layout still works with the regular editor. I'll keep looking into the code to see If I can figure out the cause.

That's a bug in the ExtendedWebView component! I'll try to fix it!