Probably I'm repeating many things already being said, but in the past used Atom for some years to take notes, and it was a good experience but not complete. At some point, it turned out to be unpleasant because it slowed down and It had far too many bells and knobs.

I chose Joplin among many alternatives just because I could import my data and also export it again, so my data was not locked in.

After a while using Joplin, I think some advantages over atom are

Atom and vs-code are designed to be general-purpose tools, extensible to do whatever you can think of. Joplin is a very good note-taking app, excellent to write notes. I never use the TODO's feature in Joplin, because for that I use Trello.

I think is important to be able of using different tools to manipulate our data, (vs-code plugin is super-useful!!).

Joplin notes have a UUID, which allows us to identify them universally among applications. This means we can mint links to notes in Joplin and give them to other people, use them in other apps, or even paste them on the Web. How cool would it be?

For me, notes are super important, because they are extensions of my own memory.

Now, I have implemented a basic joplin-hexo integration tool, if you are interested, you can try it

Rather than starting a new thread, I figured to post here. With the recent changes (I am using 1.5.14) there are many improvements and changes that are really peaking my interest. I wanted to also give credit to Laurent for how often this software is updated. That is becoming rare for developers... many staple Linux libraries are becoming stagnant and developers are beginning to start charging for their software and removing more and more of their products from the FOSS community. I believe that my hesitations on making this my final choice are solved.

Regarding the database, I have some questions. First, Joplin currently uses SQLite. If I could ask sort of a poll question.... how many notes (I know a poor measure) have people placed into it? I also wonder if the database could use MySQL. Personally, all of my computers have MySQL server installed local, replicating with the MySQL on my NAS. I understand that this might seem far out of scope for many, and to that I would agree. I mention only because I use MySQL for so many things, for example my home intranet page, it would be neat to integrate notes from Joplin in there as well. I am also well aware that SQLite is more than capable of handling more notes than anyone would imagine placing in Joplin.

I see an issue with the synchronization process, and I also understand why it is there. There is a sort of memory of prior syncs... so if I sync to A, then switch to B, then back to A, it treats A as a current sync vs a new sync location. I completely understand the issues of syncing and the dangers of mass data loss that can happen. What I wonder is if there could be a sync control panel of sort in settings. For example, If I enable A and B, I could then click to configure A and B separately from the main sync target. The new additions would then become sort of a tab of their own in the admin. This would allow m to use Sync A, switch to B then delete A from Joplin's management.

I have also tried the encryption again since I started this thread. While it works, I still have hesitations. One reason is that once I set a password, I cannot export it. Sort of like how I can create a keyset in GnuPG and export my private and public keys as needed. That said, it would be neat to use existing GnuPG keys in there as an opinion. There is also no easy way to delete a prior key, although this can be done easy enough direct in the DB.

A question regarding note history... I have admittedly not checked to see. Is the note history done incremental or full? Meaning... say I change one letter in a note each day for 10 days. Does that retain 10 full copies of the note, or just the diff of the current to that change?

@rxliuli - I will try this new tool you have added. I believe I have a perfect use for this tool, especially if it handles the images in notes well. I may also fork this, and if I do, would you like to see edits as requests to your main, or just keep as an independent fork?

At present, it can process the note reference links and attachment resources inside joplin normally.

If you have any bug fixes or suggestions, please submit pr

I have had this question on my todo list for far too long.

The main script I have is an interactive CLI tool (written in fish script) that I run each day that:

I find it a nice way to start my day! As part of that, I build some helper scripts to add a note, lookup a note, and search notes, but I rarely use those directly.

@rxliuli I needed to uninstall the VSCode Joplin plugin as the Insiders edition is not supported for some reason.

No problem. I just wanted to let you know. I still believe the issue is the difference between code and code-insiders. I took a brief look at the code, but the format is not familiar to me, so I could not verify quickly. I can say that nothing of it works, not even the refreshing of the list.

I simply checked the code insiders. After setting the token, it looks normal. Is there any more detailed error information? 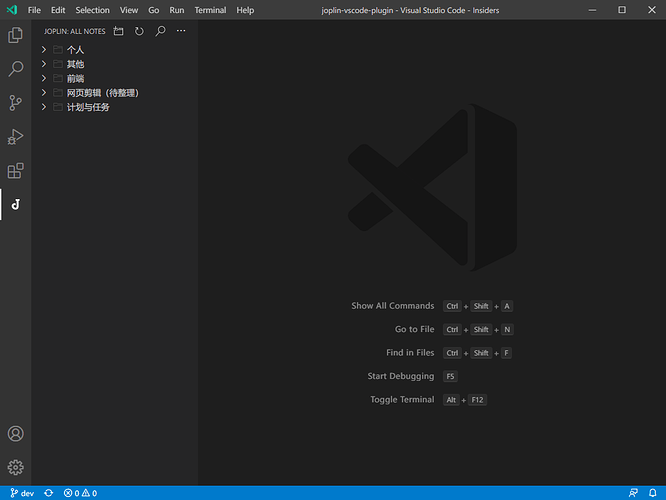 All I get is this error: "command 'joplinNote.refreshNoteList' not found"

Restart VSCode, do you see these errors? 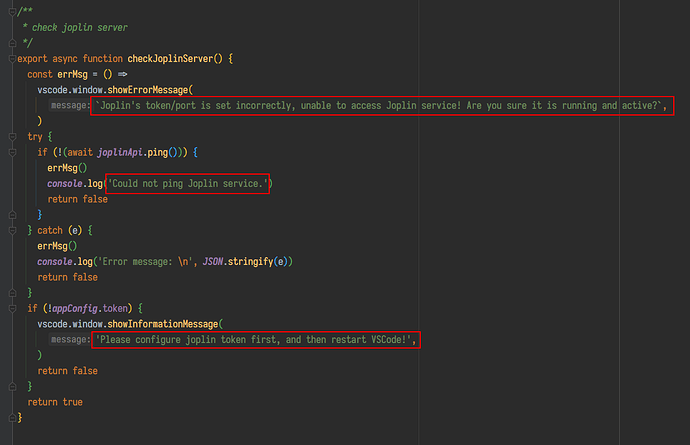 I do not. If I need to look in a specific place, please advise.

OK, I may be a bit late to he conversation here.

My Linux server runs a job at 2am daily. It runs for about 90 minutes and generates logs in Dropbox. At 6am daily a Python script runs on the iMac to combine the various logs into one file, "markdown it" and write it to Joplin. Whereas there was a single daily file that was overwritten, now I've got a record of logs that I can keep for as long as they're useful. Big improvement.

Not at all late. This sort of turned into a user's support thread. I too have noticed many changes that have improved this software. Enough to the point that I no longer question its use. I believe it is very helpful for people to share their experiences as has been done here so far. I have found it very useful!

I've tried a number of note taking apps over the years. Like so many I started with Evernote but stopped when the price went up substantially. I tried Bear but never really took to it. Recently I've been using Drafts and it's pretty good, but now it's a big set of ToDo lists. This isn't a problem, but somehow I never considered using for anything more. No notes database for example.

Joplin is my "go to" tool for note taking almost without effort because it just works for me. I still need to make a few more adjustments to the CSS, but it's not critical (the default table layout takes up way too much space IMHO).

However, there's one feature of Drafts that I do miss - you define a Workspace in terms of the tags it needs. And notes were automatically associated with the correct Workspace just based on the tags you set. Looking at a Drafts Workspace as a virtual Joplin notebook, is this something that Joplin can support? Would others consider it a useful extension?

As Joplin matures (and it looks like there are more developers involved?), I think the next step would be to look at incorporating ideas from Obsidian and the like (Roam, RemNote, Zettlr (probably the most similar), and others). There is some great innovation in the note-taking world now. Joplin is my go-to for nearly everything (especially since I write a lot of longer documents, but there are workflows that Obsidian tackles that are hugely valuable: they focus on the interconnections between notes and more or less implement Zettelkasten.

And citation management. It is mentioned in another thread. Joplin needs to plug into a citations management platform: Zotero and BibTex I think are the most popular.

Have you checked out the plugins that are relevant to note links - there are at least 3 of them last time I checked. It's not where Obsidian is in terms of this, but quite a lot better than even 2 months ago.

Glad to hear it! As for the plugins . . . I have not tried them. I can't seem to find what plugins are available via joplinapp.org. Am I being dense?

In particular, check out:

I've just noticed a slight problem with automatic backlinks. They use ### or <h3>. You can use a span or style element, but using a header element messes up a note. Imagine you don't use any headers/sections in a note, then a backlinks section looks like this: [image] Using any h? is a bad idea. Imagine someone using 2 or 4 levels. Why is the backlinks section on level 3? It also messes up the TOC. Please consider using a span or style element instead. Nothing prevents you to use a similar s…

So, I noticed the option to hide the graph is already here, but unlike the favorite plugin, the panel above isn't resized when I hide the graph view.