It's a pretty fast sync from memory so that doesn't bust balls anywhere near as much as this would have on WebDav!

Great news file sharing is in the pipeline. Any more features planned for the future for the server you can tell us about?

Great news file sharing is in the pipeline. Any more features planned for the future for the server you can tell us about?

At the moment, not much else is planned for the server because I think there's still a bit of work to really complete the sharing feature. In particular it would be good to allow setting user permissions - like who can read, write or delete notes. Also support for E2EE while allowing sharing hasn't been implemented yet.

Glad to hear this is happening! When can we expect v2 to be on docker hub?

Yes it's all in the database, and I don't know yet when it will be released but probably in the coming days.

Yes sharing a note by link was actually already supported since previous version, and will still work in v2.

Is there any plan to build v2 for ARM64? @florider did it for v1, so it's possible

I just wondered if the "official" build will support it. I ask as the Raspberry Pi 4 is quite capable as a sync target server and there is a RasPiOS64 image available.

I'm not familiar with ARM64, but if it can run Docker, shouldn't it just work?

Yes, we can build and push a multi architecture image for armhf and amd64 under the same tag.

I assume that @JackGruber has given a better answer than I ever could!

I was just going by what Docker Hub shows about the two Joplin containers (yours and @florider)and the bug report on GitHub where someone reported the "official" container errors on ARM. 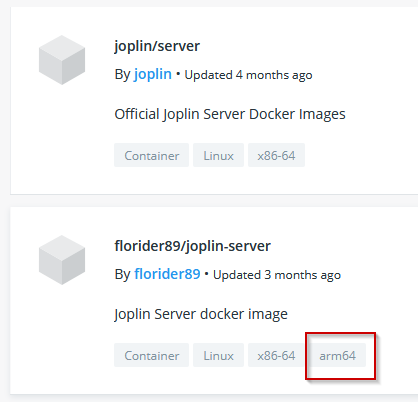 Happy to test a build on arm64 if it's not going to be officially supported as soon as the code's available on Github.
However, if the plan is to support it on the official image, I won't bother and just deprecate my image

How do you make it support arm64? Maybe we could indeed add it to the official Docker file if it's not too complicated.

I use buildx on Github Actions. I had to change up some of the dependencies on the current version to make the build work.
Both the dockerfile and github actions are in the repo: GitHub - flosoft/docker-joplin-server: Joplin Server docker image

Is it possible to beta test this right now?

The feature is merged now, so I should release the beta quite soon.

Yes I'm trying it now. It seems to synchronises fine although I feel it's a bit slow but it could be my connection. You'll also need the desktop app v2 (now in pre-release) to sync with it.

OK, I've been in IT since 1975 and your upgrade details left me in the dust.

I was with you down to:

I suppose if I'm satisfied with Joplin as it stands I can just never update again?

When you use Dropbox as Sync target, then the Joplin server info is uninteresting, because it only concerns those who use the Joplin Server as a sync target.

From the desktop client, go to Config > Synchronisation > Advanced, and click "Re-upload local data to sync target" (I don't see this option on my desktop client version 1.7.11)

I suppose if I'm satisfied with Joplin as it stands I can just never update again?

No, you can upgrade