I’ve created a small draft PR playing around with this concept: https://github.com/laurent22/joplin/pull/2099

@laurent I’d be curious to get your perspective before I go further with it. Apologies, I forgot to mention in this thread before I started, so this whole addition may not be welcome. No worries if not, I should’ve remembered to check in with you first.

As far as I see now, the adaptable userstyle.css has been implemented for Windows and macOS. I don’t know about Linux and Android, but the iOS version does not support it (or it must be well hidden). Are there any serious plans for doing so? It’s one of the things I miss most as a fresh Joplin user, because the current style settings are too space consuming on the tiny screen of my iPhone.

I’d love to be able to set custom styles across notes in iOS, too!

As far as my implementation of custom stylesheets goes, there’s unfortunately no way to set a default stylesheet for iOS because there’s no way to access an equivalent of the ~/.config/joplin-desktop/ directory.

In the short term, I’ve been adding this to the bottom of my notes to get the styles I want. Not the most elegant solution, but it makes the rendering look much nicer at least:

Longer-term, we could consider supporting a Meta Joplin notebook or something, where you can create a note called userstyle.css (just like the one in ~/.config/joplin-desktop/) that applies the styles there. Or, we could consider adding it under the Configuration panel as a big string, similar to how we store the themes. I think either of these would be a more intuitive solution for the desktop app too, rather than having to dig into the fairly hard-to-find ~/.config/joplin-desktop/ directory.

Longer-term, we could consider supporting a Meta Joplin notebook or something,

We had a good discussion going, but it died down…

An alternative for inline style definitions could be this:

The first one for my pc, the second for my Mac. I would prefer a relative stylesheet address, but I couldn’t find a way to get that working. Nor do I have any clue what kind of address I should use on iOS.

It was a good decision to make the userstyle.css device-dependent, in my opinion. Different devices demand for different stylings. But a cascade allows you to play with style scopes:

Thanks for sharing your stylesheet BTW. I hadn’t realized I could suppress the J icon at internal links this way. It’s too big, too low positioned, and ruins the regular line spacing.

I would like to get this discussion going again, so in that spirit here is my proposal.

I would propose 3 different modes for setting css.

Having these options means users can manage css as they want without having to create any specific folders or directories.

To make option 3 a bit smoother we should add in the ability for users to hide notebooks, this will allow users to create a config notebook which holds all the styling notes without those notes always being visible.

I think option 3 is the easiest one. Technically it would take very little to get this working, but it’s in terms of UX that it’s not great.

It’s a bit messy, even with hidden notebooks, because it’s mixed with the other notes. There’s also the problem of requiring the user to create notes with magic names so that they are picked up by the app. And what if there’s a syntax error in the config file? We also don’t have a good way to report that. They’ll also show up in search results, which might be unexpected.

You could use a reserved tag name, like .system or something, to identify and group config notes. 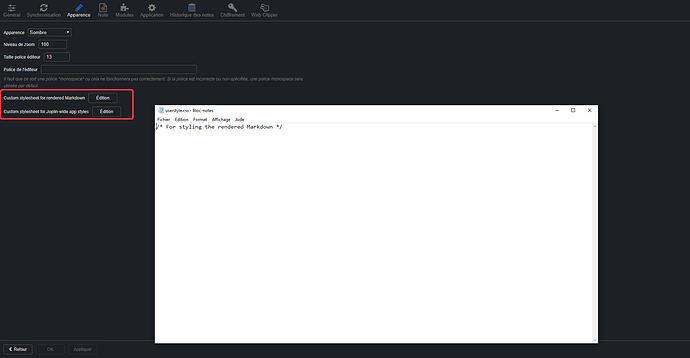