I've used a similar approach before, and for me it worked like this:

I have an article about database programming in Python which has neo4j example code. In Joplin I've added these tags (here the comma is the tag separator):

If I had nested tags, that would become:

The first approach needs the equivalent of a database join to find the article, the latter is a hierarchy which makes the finding easier. The more articles you have the more useful hierarchic or nested tags can become.

With nested tags, for similar articles I could also have:

I use it pretty much the way pw does.

It's simply a different way to traverse the data. Searching is great for when I know what I'm looking for.

Looking through it hierarchically sparks lots of new ideas, and allows me do come up with solutions I didn't think of before, just by jumping between nested tags.

I'm curious actually. StackOverflow has thousands of tags and they have no hierarchy, yet they seem to be doing fine. If you want to tag a question, it's easy, and it's also easy to find questions and answers by tag.

So what's special about Joplin that would require a hierarchy of tags? In your example, why not have the tags "cockroachdb", "mssql" and "sqlite" on their own? The tag title carries enough information that parent tags don't seem necessary, or am I missing something?

Basically I'm just wondering if the requirement for a tag hierarchy could be solved some other, simpler way.

Looking through it hierarchically sparks lots of new ideas, and allows me do come up with solutions I didn't think of before, just by jumping between nested tags

Perhaps it's a matter of adding visualisation tools like this or as below? (which could be done as plugins) Basically something that shows how tags tend to be combined to allow exploring the notes, tags and their relations. 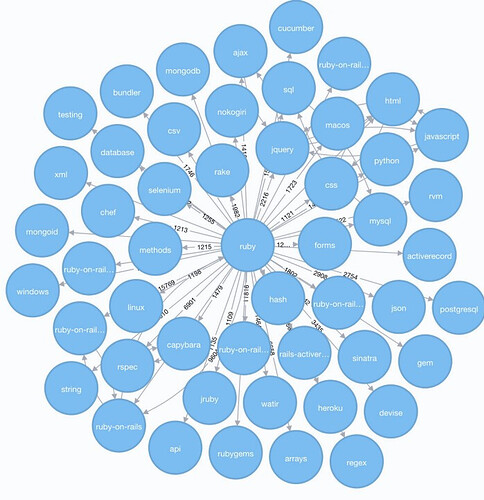 what's special about Joplin that would require a hierarchy of tags?

I think it's mostly a question of practical organization in Joplin UI. Some people have hundreds of tags (hello Evernote users !), imagine the endless scrolls looking for one of them.
A hierarchy allows you to group them by interests or whatever, just like folders.

For example in Adobe Bridge or Lightroom, I have hundreds of tags grouped by themes and sub-themes. Luckily there is a hierarchy!

In Joplin, I only have 2 folders, about 1000 notes, about 40 tags and I rely exclusively on tags to find my notes. It's not a lot but I have to refrain from creating more tags because of this lack of organisation. If I'm not careful, the list will become unmanageable.
So, at the moment I found some workaround thanks to the plugins. But in the future... ? If I reach 10000 notes ?

So what's special about Joplin that would require a hierarchy of tags? In your example, why not have the tags "cockroachdb", "mssql" and "sqlite" on their own? The tag title carries enough information that parent tags don't seem necessary, or am I missing something?

It's not a question of Joplin being special, but rather of how people's brains tend to classify information.

For me, for example, my top CliftonStrengths (that's the trademarked term, it's basically information processing styles categorized based on what comes most easily/naturally to you) are Strategist (partial pattern recognition) and Input (information hoarder). This means that my brain likes to collect lots of data, then throw up patterns from partial matches.

That means that for my style of thinking, searching is pretty much useless. If I can remember it, I don't need it.

Traversing, either skimming linear data, or going through node trees, makes me think faster. My brain will collect partial ideas, and throw up solutions based on that as I go deeper into the hierarchy.

Sometimes, it's even enough to just see the tags and/or titles. I don't need to read through the documents.

For people who have other type of mental networks, hierarchies are useless - their brains work in other was. But for me, they're essential to pretty much everything I do, from writing to mind mapping to problem solving.

(Yes, my mind maps are incredibly boring to look at - I never use the multiple node connections, only tree structures.)

@laurent - without a tag hierarchy available I do just what you suggest. For the dozen notes about different databases, the tags are the product names. As a lot of them have Python code samples, that's a tag that gets added.

But it starts to get clumsy if you want to replicate a hierarchy in a flat structure - I'm starting to retrofit a 'database' tag to the relevant notes so that I can find the notes that are about databases regardless of the product. Even with 300-ish notes I now have a couple of screens of tags which is what made me ask the original question. It's already getting clumsy to find the right articles.

I'm considering a hierarchy of notebooks which, in the end, are likely to replicate a tag hierarchy. I'll be interested to watch how my use of Joplin changes and (hopefully) improves with this approach.

another case where tags hierarchy is useful is for something like https://thesecretweapon.org
I've tried to implement it with tags without hierarchy, then with tags and folder hierarchy. it is very clumsy and un-user-friendly.

when it comes to notes, the efficiency gain is great. in pw's example you add one tag but in effect three are added.

(sorry if someone suggested that earlier in the thread)

For me, nested tags are useful for the same reason nested folders are, but with nested tags a note can be in two "folders" at once.

If I had nested tags I would no longer user Folders.

Yes, quite easily, but that doesn't help find notes with a partial tag of "browser", unless you add that as a separate tag.

I don't use tags much. I categorize by notebooks and subnotebooks, generally.

For me, nested tags are useful for the same reason nested folders are, but with nested tags a note can be in two "folders" at once.

If I had nested tags I would no longer user Folders.

This was I took to tagging in Evernote. It eliminated the decision process of which notebook to put a note in when multiple notebooks make sense.

But as the tag list grew, I found it difficult to remember the tags, so I had to start looking them up, and that became too much of a hassle to bother. So now I mostly just take care in selecting the title of the note so that I can find it easily. That and note links seems to be working for me thus far.

Using directories or tags (manually) to manage large amounts of information proved to be a failure in the Google VS Yahoo competition, so I personally hope that Joplin will improve the search function to make it easier for people to search for the information they want.

Good search saves you from investing a lot of time in note organization. I depend mostly on good titling and search rather than constantly investing time in tag or notebook organization.

Yes, quite easily, but that doesn't help find notes with a partial tag of "browser", unless you add that as a separate tag.

Actually this works in Joplin. But you have to use the go to anything feature. I think it's ctrl p. It's also in the menus. Once you have it open, type a # and then start typing. It does partial searches of all tags.

@ajay Here we go why I would benefit from Taging.

Lets asume you are a journalist. Furhter on, you are covering three main branches. 1. Politics, 2 Ice Hockey 3. religions.

Now, in all 3 toppics I deal with people that move arround and may have some opponent views, change a team or are vocal on a topc.

Now, leets take a player out of the pack because thats the easyst way to explain.

Player xyz plays with the anaheim ducks in the nhl. now he gots a new contract in europe, lets pick switzerland. The new club will be Bern in the National League in switzerland as the top league.

So, new just move the new play out of anaheim right in to bern. All the (netsted) Tag will be now moved from the player xay from the NHL tags away to the National league club Bern. just with one click.

Or, take a law maker. There is a new law to get discussed on the floor. so, as aa journalist, i would like to now the diffrent arguments from the diffrent parties (like social democratic, far right or the greens) I kow, that this particullar law maker did make a remark in a news paper about the new law, but I don`t now exactly what he said. So i click on the law maker and the law and the news pape wchich I know he did the remark. And I find the quote that im looking for (mostly).

So, my set up in evernote looked like this

I use here the "Secreat weapon" methdology with some adjustment. And it worked great in evernote . But, unfortunally for evernote, their way to change things don`t fit with me anymore.So I made the change to joplin. And it is still an onging switch thinkl about my over 40k Note that I have collectetd and taged and so on

Anyway, that how I did use Evernote. And maybe it wwork too with joplin. Ill see it, when Im done eith the switch...

Great question. I was asking myself the same question. I use Joplin for some time and I use it for personnal and professional matter... so I have more than a thousand notes. For as long as I remember, I used hierarchical organisation and not much tags... but I'm super curious to see if I could improve my organisation... because now that I started to use links between notes (and enjoy the notes graph vizualisation), I don't know if tags could improve my organisation.

Nested tags are extremely helpful to me because:

At the moment I work around this by having tags such as 'Work/Tag1' and 'Work/Tag2' on the advice of someone on here, cant remember who but thanks, but its cumbersome and I cant collapse the hierarchy, and if I want to change the structure its a pain.

I have now ditched Evernote, Joplin is way better, I love Laurent's attitude towards the availability of the app, I'm happy that there is an active community and others involved in the app

I think that the "tag filtering" function is actually better than nested tags, because it avoids the need to create the tag/subtag structure, remember the structure etc.

For example: I create a tag home and a tag work. If I have a note about air conditioning at work, I could quickly tag it with the tags work and ac, without the need to create a work/ac tag/subtag structure.

If afterwards I create a note about ac at home, I tag it home and ac, without creating the home/ac tag/subtag structure and so on.

When I need to find all the tags related to the tags work and ac, I just filter by the tag work and then filter the resulting list of notes by the tag ac.