When copying markdown link after selecting multiple notes, they should be separated by a newline in the clipboard. 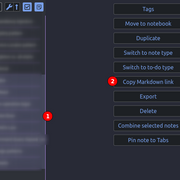 I do agree that it would make more sense.
It was a very simple change to get it working:

Also need to check if it actually works cross platform.

I think it was just a design decsion. I'd rather have them on separate lines too. If it were me, I'd create an option.

But I don't think that Laurent would accept an option, but he might be ok with just changing the behavior. You can always create a PR. If you've already written the code, it's probably eaaier to just create the PR.

@Daeraxa I assume you've written the code. Have your created a PR?

Not yet, wanted to test if it actually worked on Windows and mac, had issues with the windows dev build then Christmas came where I've been away. Planning to revisit when I return.