Hey BeatLink, I am totally new to Joplin, because I was searching for an alternative for evernote and I just wanted to say that your Agenda-Plugin is REALLY cool and helpful! Because with the new "interval"-feature it may help, that I can get rid of Todoist at the same time! Thank you so much for your work.

I have 2 bug-reports and 3 suggestions for getting even closer to Todoist:

bug 1:
I have the same problem as Giacomo with "No Due Dates", I deticked it, but it´s still there.

bug 2:
under "today" I can see the exact due-date of the To-Do (with time) but under "this week" I can only see the To-Do, without date/time. It would be helpful to the see at least the due-date at the To-Dos of "this week".
By the way: Under "today" the date is not necessary (the time is).

suggestion 1:
For me it would be very important to have the Agenda-Plugin also on my mobile (iOS). Mostly because I just like to tick the To-Do´s as "done" just right after I have done them and sometimes these To-Do´s are not related to my desk-work (with copmuter nearby), for example I sit in the park and call someone. But as far as I understood, implementing the plugins on the mobile apps is not so easy, due to App-/Play-Store regulations. So my suggestion or rather question is, if it is possible to have the plugin create kind of "magic notebooks", let´s say at least 2 of them, according to the interval categories "today" and "this week". Because notebooks are also shown on the mobile app and this could maybe a workaround to have the Agenda-intervall-feature on the mobile... but since I have no programming skills at all, I don´t know, if such a "magic notebook" that keeps itself up to date but is technically a notebook so it is shown also in the mobile app is possible at all...(?)

suggesstion 2:
I suggest the intervall-categories would be: today, tomorrow, this week, next week, this month, this year (maybe optional, so everyone can get his/her own preference)

suggestion 3:
for me it would be helpful to have shown next to the Do-To-Title also the name of the notebook/sub-notebook (only one) that this To-Do is related to. (maybe optional, so everyone can get his/her own preference)I don´t know how complicated this is.

Thank you so much!

Hi @BeatLink
I don`t want to be a pain in your a.... But I defnetly would be happy if you could check the performance problem. During the day I could work with out any major problem. From timt to time it got stuck. but after some hickups Agenda did his job.

After that reboot, I was unable to work with joplin. Even with the debug screen it did not start. BUT ita was the Agenda plugin that blocked everything. It did throw out huge error messages and it relay freezed my Notbook. I did not have any chance to take a printscreen. So I had to hot start the NB, go under the plugins folder in Jolin remove Agenda and restart Joplin. This time Joplin did start as expectet.

For me it could be two reasons why the plugin does not start. The first could be the amount of todos that I have to keep track. there are at the moment at +/- 600. But it would surprise me, if that would be the case.

As a second possibility it could by my NB. It runs with "only" 6 GB. Some other software also neded a nice hard hit on the back until they got going.

BUt what bothers me more are the errors loged in the console. May you now, if those errors got logged? If yes, I would send you the error log so that you may see the "bug".

Anyway, I do love your plugin and it works really fine. Just the hickups are not so pleasent.

This are the errors I get.

Could you create a bug report on GitHub please? As it looks like an application error.

For the tasks that are showing as no due date, add a date to them and then remove the date and see what happens.

Did you update agenda to the latest version? The previous versions did face some performance issues

I determined that our search criteria differs. Currently, the internal criteria for hiding due dates is due:1970
but yours is due:19700201 I've added the month and date to the due tag. Hopefully that resolves the issue

Hi, I have updated to Agenda v2.3.0, but unfortunately the problem still remains.

If I add the search criteria "due:19700201 iscompleted:0" the plugin hides the "No Due Date" tasks in the Agenda panel, otherwise it always shows them.

try the filter "due:19700101" in your regular search bar. Do tasks without due dates appear?

Hi, I think that you have found the problem

I thought that it was just a typo, and that they both worked the same, but I just found this:

Hi there ! I propose to open a thread to try to gather discussions about task management in Joplin (todo, GTD, etc). Personally, I am currently working in a GTD logic with a "task" notebook that contains four notes: Open : Open tasks are the stock of tasks taken on the fly that do not yet have an assigned due date. Actionable : Actionable tasks are those that have an assigned due date in less than 7 days or late. Closed : Closed tasks are finished. Waiting : Waiting tasks are tasks, with or …

And published. Should be up in a few

Had another pop at this and happily the performance issue seems to have gone for me.
Just a couple of relatively trivial observations:
Is there a way to adjust the formatting / removal of the "Agenda" title? I'm cramped on my screen.
Secondly - there are thick white (I'm in a dark theme) scrollbars in the Agenda plugin 'window', despite the window contents fitting into the window. Is that just me?

At least five thumbs up

So I made an account just to ask for help and that was when it all clicked: I'm a newbie to Joplin and I had no idea that Joplin's search function was so precise, but that is also what makes it so good.

Example: tag:todo is not the same as tag:#todo, and that when searching for items it will only find the literal string unless you say tag:, notebook:, etc.

Just thought I'd post this for those that may come after me.

Hello,
I did configure "Show To-Dos without Due Date". Still nothing shows in Agenda.
Please advise.

You have to create note to-dos, not to-dos that are inside a note.

Once you have created the to-do, give the to-do a date and time 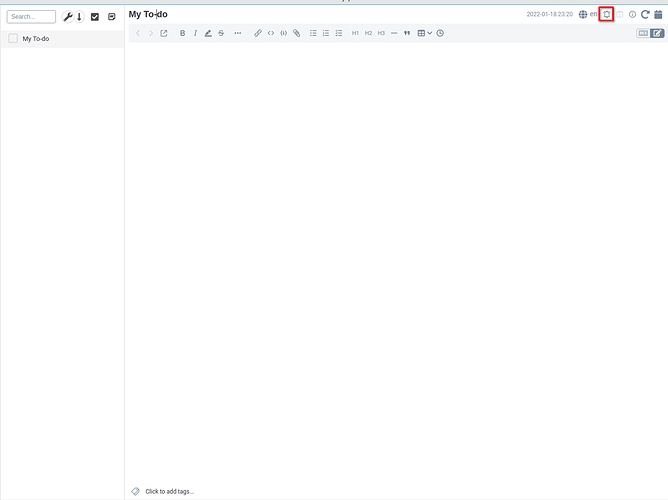 Fun fact, you can learn all about the search features here, along with other tips and guides: Joplin - an open source note taking and to-do application with synchronisation capabilities